Cheryl Hayashi uses a microscope to work on a spider in her lab at the American Museum of Natural History in New York. Hayashi has collected spider silk glands of about 50 species, just a small dent in the more than 48,000 spider species known worldwide. (AP Photo/Jeremy Rehm) 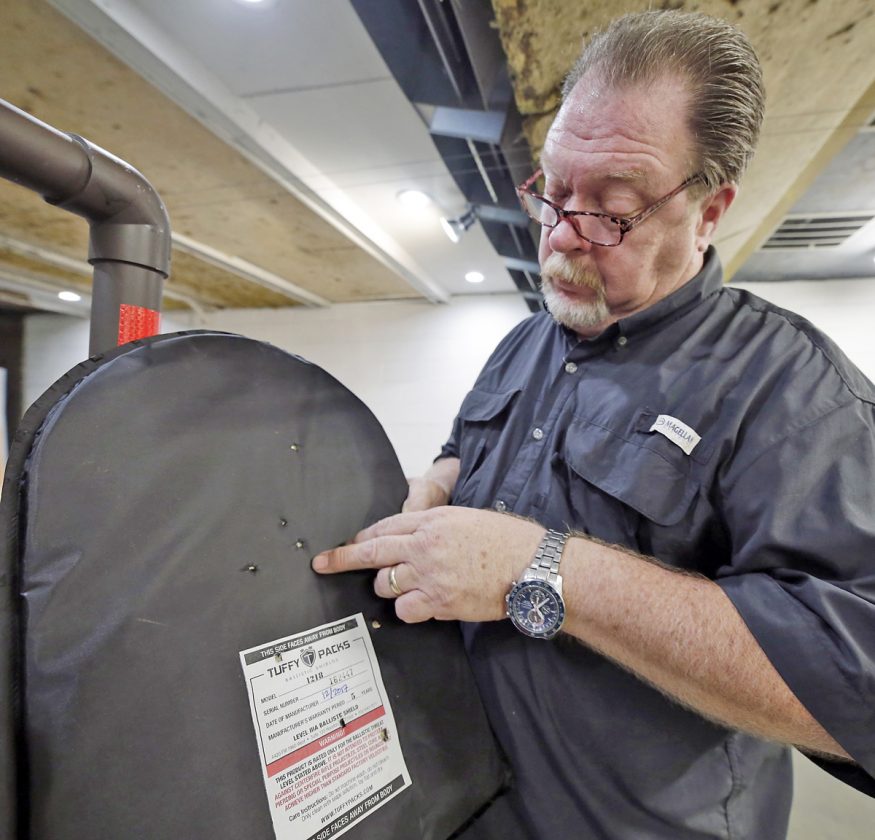 Steve Naremore, founder and CEO of TuffyPacks, shows the impact points on a ballistic shield retrieved from a backpack after a shooting demonstration of the stopping ability of the product at the Shiloh Shooting Range, Friday, August 9, 2019, in Houston. His company produces some bullet-resistant backpacks but the bulk of his business is in removable ballistic shields that are inserted in backpacks. (AP Photo/Michael Wyke)

NEW YORK (AP) — Companies like Guard Dog Security, TuffyPacks and Bullet Blocker are peddling bullet-resistant backpacks for children in time for the back-to-school shopping season. But critics argue they are using tragedy as a marketing opportunity and exploiting parents’ worst fears.

Safety is high on the minds of many parents, especially after two back-to-back mass shootings in El Paso and Dayton, Ohio that left 31 people dead.

Sheikh said the bullet-resistant backpacks are very popular and sold out several times after the 2018 Parkland, Florida, school shooting that left 17 people dead.

Steve Naremore founded Houston-based TuffyPacks in late 2015 after his daughter, a fourth-grade teacher, told him about the frequency of active shooting drills for her students. His company produces some bullet-resistant backpacks but the bulk of his business is in removable ballistic shields that are inserted in backpacks. 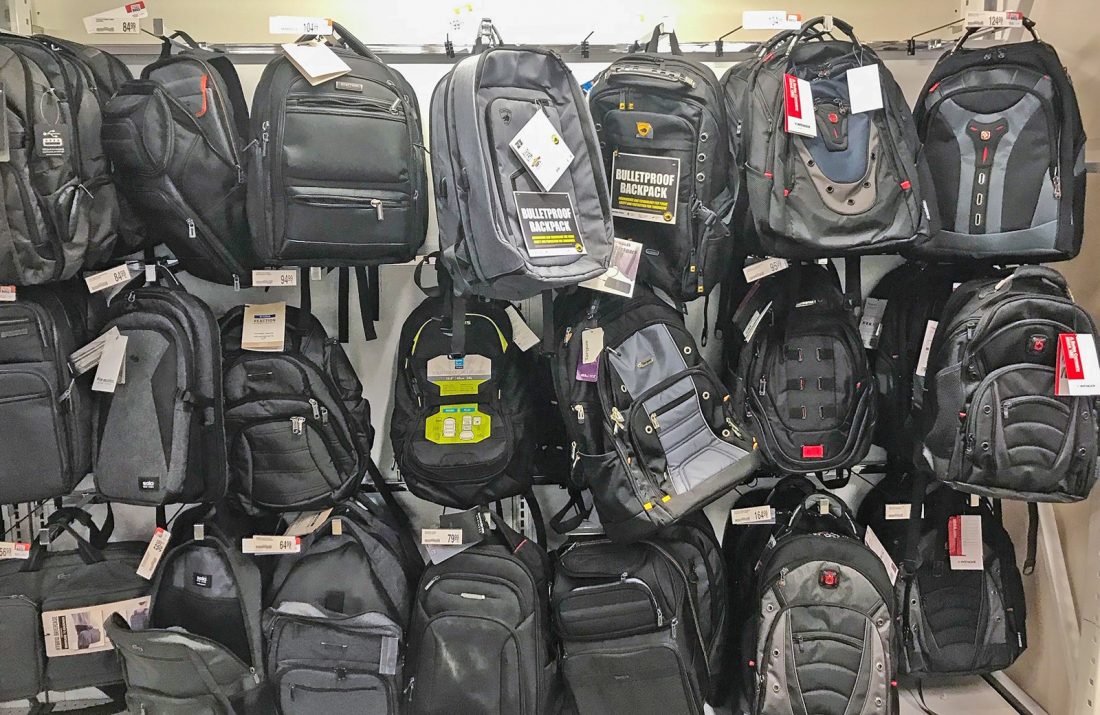 This Thursday, Aug. 8, 2019 photo shows bulletproof backpacks that for sale at an Office Depot store in Evanston, Ill.. With the rise of mass shooting, companies like Guard Dog Security, TuffyPacks and Bulletblocker are creating bullet-resistant backpacks for children for the back-to-school shopping season. Many say theyÕre seeing an increase in sales in their products leading up to the fall, and typically see a spike in sales after a mass shooting. (AP Photo/Teresa Crawford)

Naremore says his backpacks could be the difference between suffering “lethal versus non lethal” injuries. “It acts as a defensive shield, “said Naremore, noting sales of the shields tripled in the days after the mass shooting at a Walmart store in El Paso last week that killed at least 22 people.

But some parents question the motives behind such companies.

“The only people enjoying it are the people selling the backpacks,” says Ponnell Scroggins of Milwaukee, a father of six children, ages 3 to 14. “They’re making plenty of money right now. And they’re doing it off of something that was very unfortunate.”

TuffyPacks markets its products on its website with mass shootings in mind: “Are you and your family protected in the event of a school or workplace shooting? Be prepared for the worst situation with the industry’s best ballistic shields!”

And its backpacks don’t come cheap. TuffyPacks’ shields range in price from $129 to $149. Skyline’s ProShield Scout backpacks are priced at $119, although it’s less than the adult version that tops at $199.

Some also cast doubt on the backpacks’ safety and how much they can really protect children.

Both Guard Dog Security and TuffyPacks claim their products are tested in independent labs in line with the standards for the National Institute of Justice and meets the requirements for a Level IIIA rating. That means the shields can thwart a 9-millimeter handgun and a .44 magnum. Naremour says it’s like wearing a police vest.

But the National Institute of Justice — the research, development and evaluation arm of the Department of Justice that comes up with the rating — has itself never conducted tests on these products or certified them and therefore cannot vouch for them. “Marketing that claims NIJ testing or certification for such products is false,” said Mollie Timmons, a Justice Department spokeswoman.

The backpacks also don’t protect against military-style weapons, which were used in several mass shootings including Parkland as well as Sandy Hook Elementary School in Connecticut, in which a gunman killed 20 children and six educators in 2012. Sandy Hook remains the deadliest mass shooting at either a high school or grade school in U.S. history.

Greg Shaffer, a former FBI agent and an expert in domestic terrorism, notes that the majority of active shooters use handguns. Nonetheless, bullet-resistant backpacks may not be effective because children often have to leave their backpacks in cubbies in homeroom so they wouldn’t have them with them if there were an active shooter. Not many children are shot and killed going and coming to school, he added.

“I just don’t think that for the money and the extra weight that it is much more effective in protecting kids,” he said.

For the most part, major retailers like Walmart and Target seem to be staying away from the backpacks.

An Amazon spokeswoman said it doesn’t sell bullet-resistant backpacks either and pointed to its policy that bans selling body armor and any product that includes bulletproof or ballistic helmets and clothing.

Meanwhile, Office Depot, Inc. carries Guard Dog Security products in select Office Depot and OfficeMax retail stores across the U.S. as well as online while Homedepot.com carries ProShield backpacks. The bulk of the selling, however, seems to be from small independent online retailers like Bulletproofzone.com.

“Big chains are hesitant to carry them because of the liability issue,” said Craig Johnson, president of Customer Growth Partners, a retail consulting firm. “I don’t see it as a mainstream type of product.”

Earlier this week, Walt Disney Co. demanded TuffyPacks to stop selling bullet-resistant inserts featuring Disney princesses, Harry Potter and Avengers characters from its line. “None of these products were authorized by Disney, and we are demanding that those behind this stop using our characters or our other intellectual property to promote sales of their merchandise,” said a Disney spokesperson in an emailed statement to The Associated Press.