League Park brings the past back to life 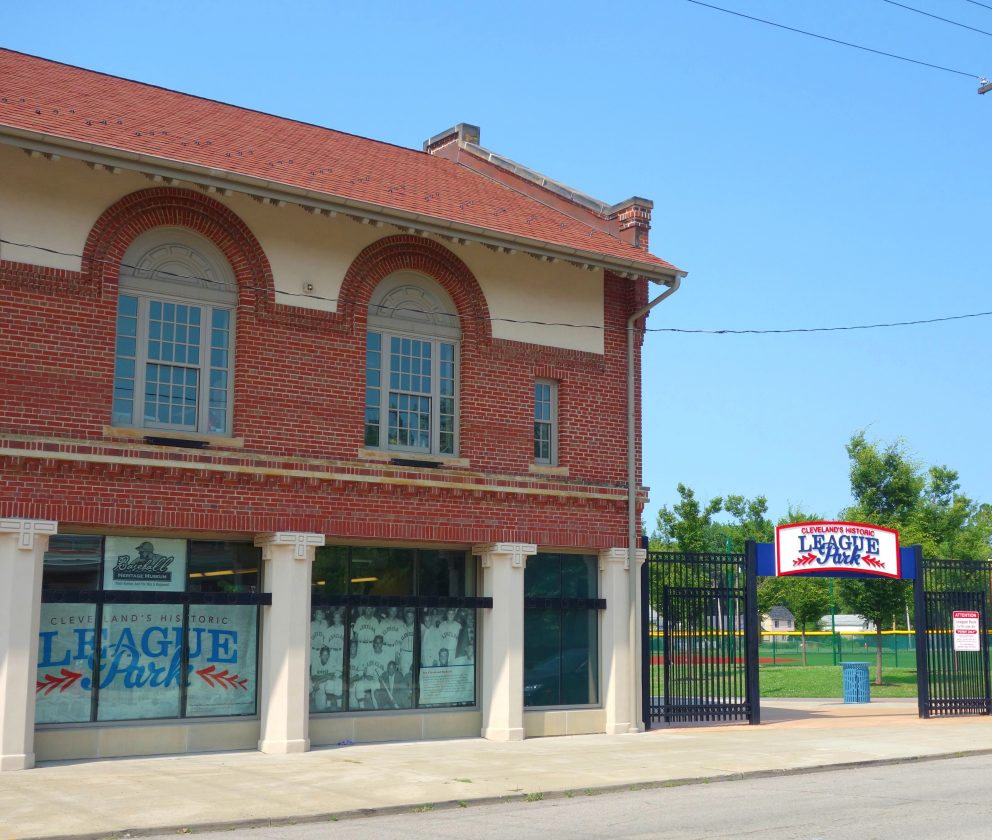 Shown is the former ticket office for League Park at the corner of East 66th and Lexington in Cleveland. The building now holds the Baseball Heritage Museum.

CLEVELAND — About 3 miles away from all of the festivities at Progressive Field over Major League Baseball’s All-Star Game break, League Park quietly entertained fans looking to make a pilgrimage to a unique place in American baseball history.

League Park was in service as a baseball venue for the city of Cleveland from 1891 to 1946. During that time the Indians — including dating back to the times when the club was called the Naps, Broncos, Bluebirds and Lake Shores –as well as the National League’s Cleveland Spiders and the Negro American League’s Cleveland Buckeyes called the ballpark in Cleveland’s Hough neighborhood home.

Unlike many defunct ballparks around the country, League Park never fully gave up its identity as a park. Yes, most of the seating and fencing came down around 1951, but one could still play a ball game on the hallowed field — which saw many of the stars of the Golden Age flourish — all the way up until present day. In other words, it was never bulldozed over for a parking lot, converted into housing, turned into a shopping center or cleared away for a road.

After the park fell into severe disrepair following a stint as a community center, the city of Cleveland decided to step in to restore the grounds including what was left of an original brick facade and an abandoned ticket office at the corner of East 66th and Lexington.

The project was completed in 2014 and the field was restored with an artificial turf playing surface which was set up like it was for the 1920 World Series in which the Indians defeated the Brooklyn Dodgers five games to two. The remaining wall was decorated with murals of stars of the past including Babe Ruth and Satchel Paige.

The bottom floor of the renovated ticket office was handed over to the Baseball Heritage Museum. That museum was established in downtown Cleveland in 1997 and includes artifacts from the Cleveland’s baseball past including nods to amateur leagues, women’s baseball, the Negro Leagues and Major League Baseball.

Since it’s a public park, one is given free reign to wander the grounds and imagine what it must have been like when the park was humming on game days. Other classic stadiums which were long ago victims of the wrecking ball, have bits and pieces you can still see. For instance, in the northern part of Manhattan you can visit a section of stairs which led to the Polo Grounds. In Pittsburgh, you can see a portion of the outfield wall of the former Forbes Field.

No other defunct baseball stadium site is as complete as League Park, however.

This was a stadium which saw Cy Young throw out its first pitch as a member of the Cleveland Spiders in 1891. It was the site of the only unassisted triple play in World Series history in 1920. That same year also saw the World Series’ first grand slam.

It was a place that saw the final game of Joe DiMaggio’s 56-game hitting streak in 1941 (it would would be snapped at Cleveland Municipal Stadium a day later).

The Cleveland Buckeyes won the Negro League World Series there in 1945 and the Boston Red Sox clinched the American League pennant on the hallowed grounds in 1946.

The living museum to Cleveland’s baseball past is open 1 to 4 p.m. on Wednesdays, Fridays and Sundays as well as 10 a.m. to 4 p.m. on Saturdays throughout the summer. It is free.