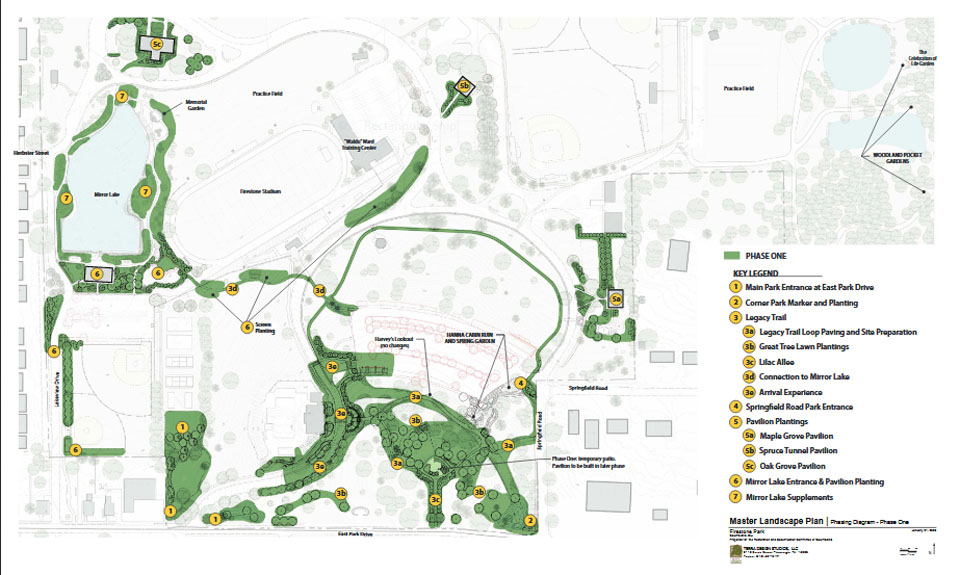 COLUMBIANA — After an introduction from Pat Tingle of the Restoration and Beautification Committee, Terra Design Studios’ Anna Werle presented the final plan for phase one of the landscaping restoration of Firestone Park at Tuesday’s city council meeting.

After a year-long process of planning and an approval from the park board, council approved the project, which is possible through the donation of Tingle in honor of her late husband and son. She hopes the project will be completed by the end of the year.

“We’ve had the pleasure of working with Pat and Terra Design over the past year,” park board chairman Dr. Ron Detwiler said. “The plan is truly impressive and we’ve gone through the procedures. Every problem that has come up, we’ve been able to address.”

The main entrance will be at East Park Drive leading up to the pool area, where they will shift the alignment of the road to create more of a waiting space and planting area. There would also be a little pull-off area across the street from the pool for people dropping off kids or seniors.

Terra Design also plans to implement the Legacy Trail, which goes through the big lawn at the south end of the park by East Park Drive. It will be delineated by color concrete, so visitors will know it is a specific track to take. In the Legacy Trail, they will also create the Idabelle Gathering Space and Garden, named after Harvey Firestone’s wife. It will be a patio surrounded by gardens, with the possibility of creating a larger pavilion in the future.

The Legacy Trail will also be connected to the cemetery visually and physically with a sidewalk. In the current phase, Harvey’s Lookout and Hannah Cabin will not be changed and the older monuments will remain untouched during this phase.

A connection will also be made to Mirror Lake with a path, and Werle said they would like to think about adding steps to the football stadium entrance. To establish park boundaries, brick piers with bronze signs will be added as an introduction to the park at the secondary entrances on Springfield Road and Lakeview Drive.

The four pavilions will be renamed based on the plantings surrounding the theme, and each pavilion will have a different theme based on the four seasons. For example one pavilion will be named the Oak Grove Pavilion due to the oak trees in the area.

“It takes a certain type of vision and gumption to take on something this large,” Mayor Bryan Blakeman said about Tingle. “When you take on something like this, you’re going to ruffle some feathers. But you’ve done a fantastic job of incorporating all of the historical aspects of it and trying to showcase them.”

While Tingle realizes that there may be disagreements about some changes, her goal is to magnify the historical elements and honor the town and Harvey Firestone.

“Yes, it takes a little bit of change, but look what we’re getting,” Tingle said. “When we turned this over to Terra Design, we had no idea what they were going to do with it. My contribution was to honor my son and husband, and I think the end result is going to be incredible.”