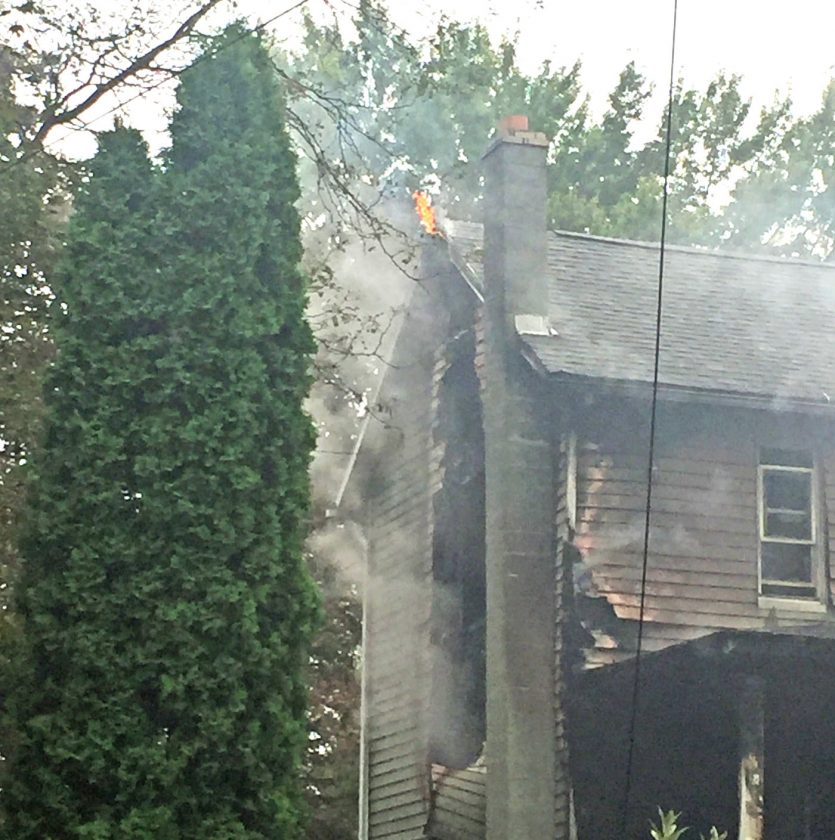 SALEM — Amy Custer said she’s thankful nobody was home and that her dog got out safely when a fire-ravaged her residence at 1108 Newgarden Ave. late Monday afternoon.

As she stood in the front lawn of the Salem Wesleyan Methodist Church and Salem Wesleyan Academy school, looking at what was left of her two-story house as firefighters cleaned up, her emotions ran the gamut from despair over what happened to gratitude over what didn’t and for the support of family and strangers rallying around her.

“We appreciate all your help, all your kindness,” she told one woman.

Custer was visiting her husband, Dave, at Salem Regional Medical Center where he was hospitalized with pneumonia when she heard through social media about a house on fire across from the church. Her mother, Naomi Grimm, saw it on social media and called her, asking if it was her house.

As she made her way up the street on foot and saw the house surrounded by firefighters, she said “my knees buckled out from under me and I fell to the ground.” 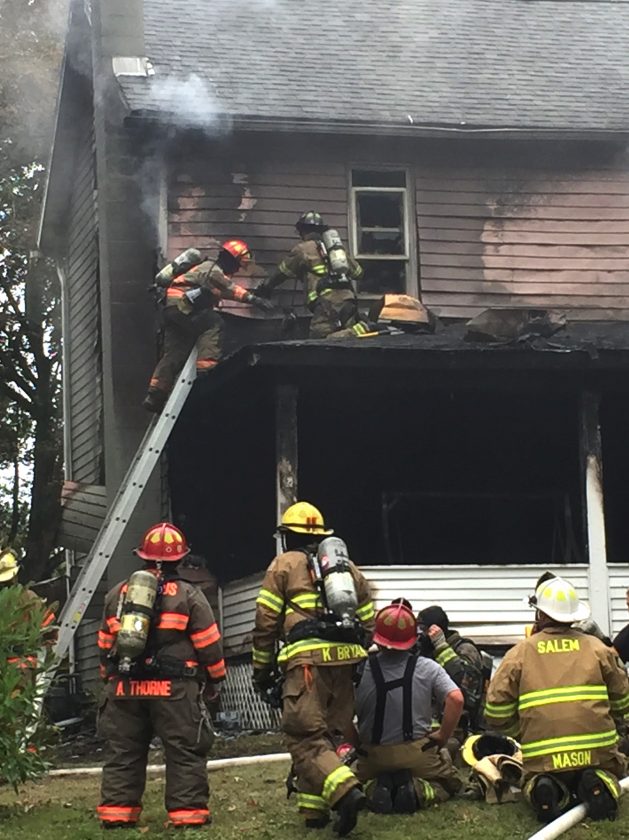 Morning Journal/ Mary Ann Greier Firefighters check for fire in the walls on the second floor off of the porch and extinguish hot spots inside this house at 1108 Newgarden Ave. in Salem where a fire broke out late Monday afternoon, causing heavy damage throughout the two-story structure. No one was home at the time of the fire. The family dog was found outside and was ok, but a pet hamster and some fish had been inside the residence.

Custer resided in the home with her husband, her son Kyle and his girlfriend Catherine Hepburn-Bryant, and their child, her granddaughter, who had just celebrated her birthday during a party at the house over the weekend. Hepburn-Bryant said she had just been there a short time before the fire started to grab something she needed before going to a doctor’s appointment. When she left, the chihuahua Olivia was inside the house.

Salem Fire Chief Scott Mason said the department received the call for a structure fire at 3:31 p.m. He was on his way home and turned around, arriving first on the scene. The dog was already outside. He said there was only fire visible in one room at that time and the porch wasn’t on fire. The rest of the department got delayed by a train and by the time the train got past for the trucks to come up Newgarden, Mason said the fire was “pretty much fully involved. I called for Perry Township and Damascus. When (Salem) got delayed, I knew it was going to have a decent head start on us.”

Firefighters found no one inside after two sweeps of the interior for victims and worked on extinguishing the flames and several hot spots and busting through walls to search for any fire extension. The smoke could be seen and smelled from a distance. Mason said it looked like the fire started in what he guessed was the living room, on the northeast side of the house.

He said the cause was undetermined and under investigation. He called in an investigator with the State Fire Marshal’s office and Salem Police Detective Dave Talbert for assistance in the investigation, which he said he normally does with a fire that causes such a large loss.

The home was built in 1865 according to Columbiana County Auditor’s website records and was mostly wood, with a ballon frame construction, Mason said. There were also oxygen tanks inside that belonged to Custer’s husband, who had also been recovering at home from another medical issue before being hospitalized.

He said the home, which was insured, is a total loss and asked if anyone saw anything to please call the fire department at 330-337-6183 or the police department at 330-337-7811. He confirmed that three men, a private-contract utility worker, a volunteer firefighter from Hanover Township and a teacher at the school across the street tried to help before anyone arrived, concerned that someone was inside. He said the utility worker saw the flames through the window.

The teacher, who didn’t want to be named, initially thought someone was burning leaves or something outside, but when he went outside to check, he noticed the smoke coming out of the house. He and the other two men ran over, saying “we were worried that somebody was in the house. We kicked the door in.”

“Fortunately nobody was in there, but you feel bad for the family,” he said.

The Custer family moved into the home in July 2017. Amy Custer said her husband would not have made it out if he had been home. She said she had a pet hamster and some fish who were inside at the time of the fire. They likely perished. She hugged her dog and held her close when they were reunited. She was thankful for her family and said they’ll probably end up staying with family members. Her mom said she has a lot of family, many who came to the scene, adding “we’ll take care of them.”

Both the American Red Cross and Salvation Army were being contacted to assist. No injuries were reported. EMT ambulance was on the scene along with Salem Police who were directing traffic in the busy residential area.

AURORA — A man who allegedly stole more than $700,000 from the VFW post here has been charged with aggravated ...

LISBON — A former East Liverpool man already in the county jail awaiting an upcoming hearing on other charges ...