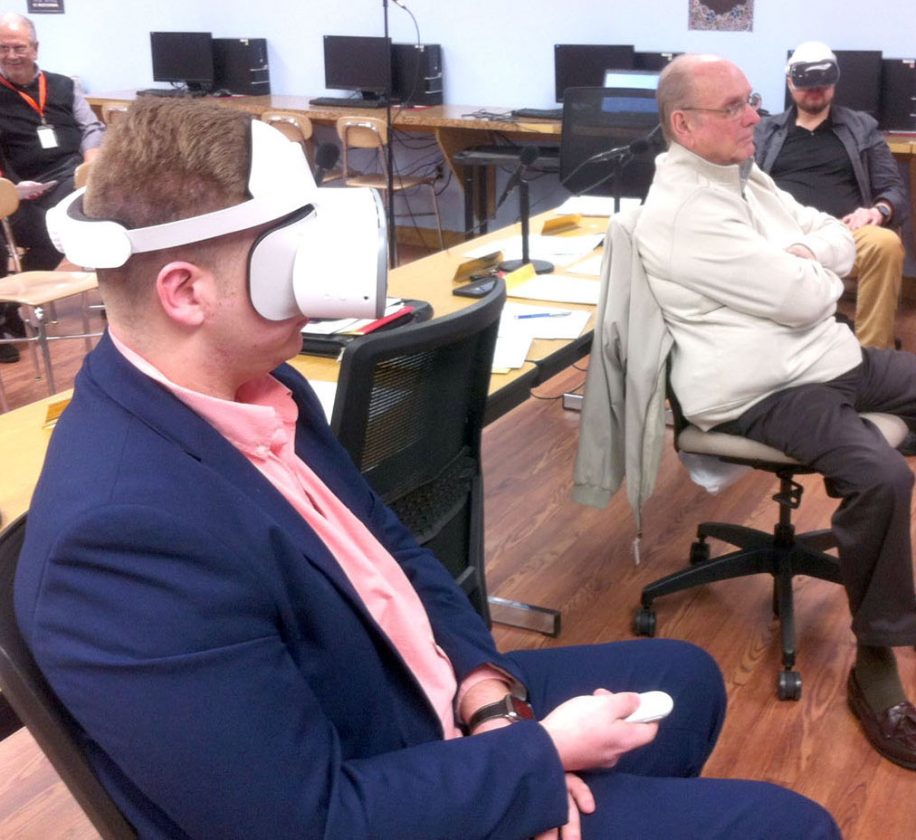 Submitted photo Wellsville school board members get a dose of virtual reality as the school’s tech department demonstrates an educational VR system being considered for purchase and use in the middle and high schools. Pictured from left are Austin Dalrymple, Ed Bauer, and and Gary Althiser.

WELLSVILLE — Wellsville’s Board of Education dealt with situations of both reality and virtual reality at its Monday meeting.

Bill Ricciardulli and Preston Sosack of the district’s tech department took board members on a virtual tour of the planet Mars in a demonstration of a Lenovo virtual reality system they plan to recommend for purchase at an upcoming meeting. Two portable carts, each with 24 VR headsets, would be available for use in all middle and high school classes.

“People think of (virtual reality systems) as a gaming device, but they have become really very educational,” Ricciadulli said. Pricing has come down to make school purchase feasible, he told the board.

The dose of reality came when a presentation on the Nicholson Stadium renovation project plans had to be postponed. The presenter from J.T. Sauers and Associates could not get a flight in, due to the grounding of so many Boeing Max jetliners following two plane crashes.

Superintendent Richard Bereschik said a special meeting may be called next week so the project won’t be delayed. Sauers is an architectural firm specializing in athletic stadiums.

The board accepted the resignations of two veteran district educators with official regrets and several personal comments of praise and best wishes. Wellsville High School Principal Linda Rolley is retiring after 45 years as a teacher and administrator. Robin Weeda, high school business and computer teacher, is retiring after 32 years of teaching.

“They will be sorely missed, but they said they will be glad to help the district in other capacities in the future,” Bereschik said.

“We are losing two major cogs in the administration and teaching staffs, and these people will not be easy to replace,” said board member Ed Bauer.

Austin Dalrymple, a board member and recent WHS graduate, said Mrs. Rolley was a caring principal and Mrs. Weeda “was one of the best teachers I had.”

The board also accepted with regrets and best wishes the resignation and retirement of Ed Swogger, head coach of varsity and elementary girls’ basketball, ending a 19-year career coaching basketball in the district.

Bereschik said Swoggers’ won-lost record spoke for itself, but he was much more than that to his athletes. “He ran his programs very well,” the superintendent said.

“He has been a class guy and we wish him well,” said Board President Gary Althiser.

On the recommendation of the state auditor, the board transferred $1,000,870.82 from the general fund to the capital projects fund. Bereschik said it was simply a case of placing the money for recently completed roof and HVAC renovations to Garfield Elementary in the proper fund for payment to contractors.

The board entered into a $7,000 contract with Buehrer Group Architecture and Engineering Inc. to design plans for replacement of two boilers at the high school. Funding will be from an Ohio School Commission bond issue.

Field trips approved were: to Chicago by the Academic Challenge Team May 3-5 for the National Small Schools Championships, and by one student, Mitchell McIntosh, April 1 for the Individual Player Academic Challenge National Championships; to Carnegie Science Center March 21by the high school science club; to Camp Fitch by fifth and sixth graders Sept. 4,5,6; and to the Pittsburgh Children’s Museum by first graders April 29.

Nancy Francis reported the annual Back to School Bash is set for Aug. 15. School supplies for all students will be among highlights.

Bereschik said Eric Brown of New York Life has secured three $500 bereavement grants, one for each school building. They can be used in a variety of ways to help students in difficult family situations.

In partnership with Second Harvest Food Bank of Mahoning Valley, the school district will host a second community food distribution this Friday, March 22, from 10 a.m. to noon. There are no qualifications or restrictions on eligibility, though it is primarily aimed at Wellsville residents.

This will be a drive-through event, with volunteers placing a box of food in vehicles as they drive through the high school rear parking lot.

In the first food distribution on Dec. 18, the food bank gave away 12,000 pounds of food, Bereschik said, and this event promises to be larger.