The 2018 West Branch graduate suffered a torn ACL for the second time in her basketball career shortly before the season began.

After seeing a bit of action in the Cougars first two games, testing revealed the injury and shut down her season. Hovorka played a total of 13 minutes in her two games this season, scoring three points and grabbing one rebound.

She had surgery the day after Christmas and spent the rest of the season rehabbing and cheering on her team from the bench. The NAIA Cougars finished the season at 18-13 after falling to Taylor University 68-66 in the quarterfinals of the Crossroads League Tournament on Feb. 25.

She played in 31 games and started five at guard as a freshman for Mount Vernon Nazarene, averaging 6.3 points and 2.1 rebounds per game.

At West Branch, Hovorka came back from a torn ACL as a freshman to help lead the Warriors to back-to-back regional appearances and an unbeaten regular season as a senior.

“The only church that feeds the soul, day in, day out, is the church of baseball.” — Annie Savoy (Susan Sarandon) in “Bull Durham”

Not the time to play tennis

WHITE PLAINS, N.Y. (AP) – The U.S. Tennis Association says its best not to play the sport right now because of the coronavirus pandemic.

In a posting on its website on Friday, the USTA called it “in the best interest of society to take a collective pause” from tennis.

The statement said there have not been specific studies about tennis and the COVID-19 illness.

But there is “the possibility” that germs could be transferred among people via sharing and touching of tennis balls, net posts, court surfaces, benches or gate handles.

So the USTA wants players “to be patient in our return to the courts.”

In the meantime, the group encouraged people to create what it termed “tennis-at-home” variations.

EOAC games will be first It didn’t take the Eastern Ohio Athletic Conference long to decide on the 2020 ...

A fall without any MACtion

In many ways, the Mid-American Conference has little in common with Power Five leagues that first come to mind when ...

SAN FRANCISCO — The best shot of his life, the shot that made Collin Morikawa a major champion, was never ...

The Power Five conference commissioners met Sunday to discuss mounting concern about whether a college football ...

Don’t sleep on the wonders of catching carp

If you read last week’s column about invasive flora and fauna you may decide that I think the introduction of ... 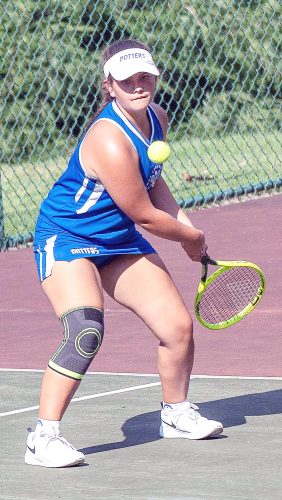