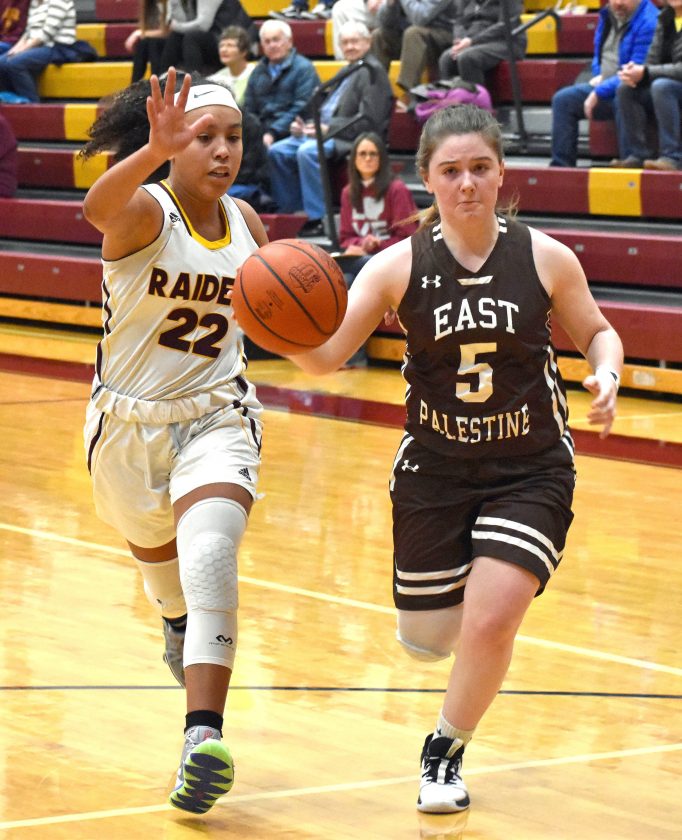 GREENFORD — East Palestine’s girls basketball team had a season in which it tallied 15 wins, building upon a winning campaign from the previous season.

Even with that positive tailwind, the Bulldogs could do nothing to stop South Range on Saturday in a Div. III sectional final.

Playing what coach Jeff Fishel called the team’s best first quarter of the season, the Raiders ran out to a 25-1 lead in the opening frame and never looked back in a 55-34 win over the Bulldogs.

“They’re a good team,” East Palestine coach Will Franklin said. “Their speed and aggressiveness got us, so hats off to them.”

The second-seeded Raiders (17-6) will meet third-seeded Columbiana at 6 p.m. on Wednesday in the first game of district semifinal doubleheader at Struthers Fieldhouse. Top-seed Liberty will meet No. 4 seed Crestview in the nightcap.

“That’s the reason we play the schedule we play so we’re prepared for this time of year to play a game like that,” Fishel said. “That was probably the best we started all season, so what a time for it.”

Sophomore guard Lexi Giles created much of the chaos on defense for the Raiders and even had a solid game on offense with 18 points.

“She puts in a ton of time behind the scenes,” Fishel said. “She’s a gym rat. She’s in here all the time. It shows. For her to come out and play a game like that is just a testament to how much work she puts in. She made a huge difference in that game for us.”

“It was our first (tournament) game, so we wanted to start off fast so we could keep the pace going throughout the game,” Giles said.

Giles said even though the score was heavily in the Raiders’ favor early, she knows they have to keep the intensity going if the team wants to keep advancing in the tournament.

“Coach wants us to finish the game how we started it,” Giles said.

Giles added that the Raiders playing in the Northeast 8 featuring larger schools definitely helps during the Div. III tournament.

Junior standout forward Izzy Lamparty led the Raiders in scoring with 19 points. Outside of Giles and Izzy Lamparty, no other Raider scored more than five points, but the team rested many of its front-line players in the second half as the game was no longer in doubt.

“We get to go play a game in the historic Struthers Fieldhouse, so everybody that gets the pleasure of going there is a good basketball team and we’re going to get in the gym and work hard,” Fishel said.

Even with an impressive, dominating performance against the Eastern Ohio Athletic Conference’s Bulldogs, Fishel said he wasn’t about to allow that to affect the preparation for the EOAC champs in Columbiana.

“When you get to the end of February in tournament play, I don’t think there’s any good barometer for the next game because when it’s the ‘Win or go home’ style of play you don’t what to expect on any given night,” Fishel said.

East Palestine was led by Paige Snyder and Joclyn Fristik, who tallied 10 points each.

¯ Franklin was pleased with the way the Bulldogs (15-9) competed this season.

“I thought we had an amazing season,” Franklin said. “For us to have back-to-back winning seasons, which hasn’t happened in a while, was great. The girls played hard every game and we had some big wins this year. There was a lot of positives in there. I’m not disappointed.”

¯ Franklin thinks the South Range-Columbiana game will be a good match-up.

“South Range’s overall team speed and size may give them some issues, but it’s going to be a fun game to watch,” Franklin said.

¯ The game went into running clock mode with 2:35 left in the third quarter as South Range went up 35.

Under OHSAA rules, a running clock is implemented in tournament games when the margin hits 35 points in the second half. It resets back to a normal clock when the score margin drops below 29, which it eventually did early in the fourth quarter.