Potters on way to OVAC final 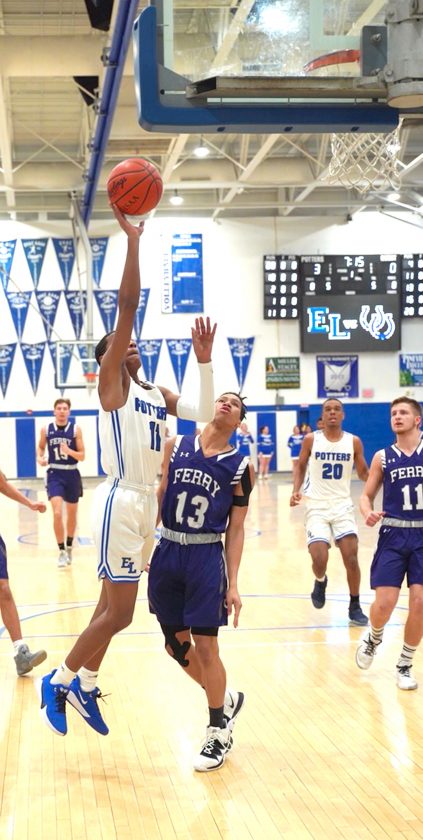 EAST LIVERPOOL — With seven days to stew over last week’s upset loss to Oak Glen, the East Liverpool Potters took the court for Tuesday’s OVAC 4A semifinal looking very much like they had a point to prove.

“If you can’t tell, we were a little upset about that Oak Glen game last week. They played good, but we thought we let that one slip away,” East Liverpool coach Nate Conley said. “We had a bitter taste in our mouths and the kids came out an played really tough tonight. I think it was the best game we’ve played all year.”

The Potters (14-4) now get a chance to fulfill one of their biggest season-long goals when they take on top-seeded Meadowbrook for the 4A championship at 10 a.m. Saturday at Ohio University Eastern. Martins Ferry falls to 11-9.

“We really want this (an OVAC title) bad,” Jackson said. “We’re looking forward to trying to get a win down there.”

“The OVAC is something we’ve had marked down since the beginning of the year,” Conley said. “We’ve only made the finals in two of my ten years here. It’s going to be a lot of fun Saturday.”

Jackson put his stamp all over the game with 31 points, eight assists and five steals. Brennan O’Hara had a fine night of his own with 15 points and four rebounds. Timmy Neal added nine points and a team-high seven rebounds.

“I thought tonight was Tresean’s best overall game as a Potter,” Conley said. “He didn’t gamble on defense and he was able to get everyone else going. When he plays like that, that’s when we’re at our best.”

The potential was there for a competitive matchup coming into the night, but the Potters made sure the game was essentially over by halftime.

Everything was fueled by their dominant defense, which successfully walled off Martins Ferry forward Logan Smith in the first half and created ample transition opportunities for the offense.

“For the past week, we focused every day in practice on not letting him (Smith) touch the ball,” Jackson said. “We knew if we wanted to win this game, we had to play great defense from start to finish.”

The Potters led by three with 3:47 left in the first quarter before blowing the game wide open with a 28-5 extended run that lasted the rest of the half. The lead was 37-11 at the break.

“A lot of people are going to leave here tonight not knowing how good Martins Ferry is,” Conley said. “They have a good team with some nice wins this year. I just thought our guys came out and played really tough tonight.”

The Purple Riders shot 4-of-18 in the first half, while also turning the ball over nine times.

“We have to be better in every facet of the game than we were tonight,” Martins Ferry coach Derek Edwards said. “Their athleticism bothered us and we weren’t able to get anything going offensively. We have a lot to work on starting tomorrow at practice.”

Smith got going a little bit in the second half and finished with 16 points and seven rebounds for the Purple Riders. By then, though, the issue had long been decided. Dasyn Hores added 11 points for Martins Ferry, which will host Harrison Central in a consolation matchup Friday.

“The biggest thing I told the kids is that there is a tomorrow,” Edwards said. “It’s a fresh opportunity to get back in the gym and get to work.”

¯ Meadowbrook beat Harrison Central 70-43 in the other semifinal. The Potters played Meadowbrook on December 21 and fell 53-37.

“You may as well throw the last game out the window when you play someone in December because so much can change between then and now,” Conley said. “We’re excited for the opportunity and we’ll be ready to go.”

CALCUTTA — The Beaver Local wrestling team put on a show in a 57-18 win over Boardman on senior night ...