The Big Red girls basketball team jumped out to an early lead and led wire to wire, racing past the tired Potters, 60-31, Thursday night inside the Crimson Center.

“No games are easy,” Big Red (10-3) head coach Jeff Lombardo said. “I have seen East Liverpool on film. The other night they were down by 15 or 16. I don’t think they ever had the lead, but they came back to win by one because they kept fighting. They are in stretch were they have played a lot of games in a short amount of time. We thought if we could extend the lead, they may get a little tired. It never feels easy.”

Big Red scored the first six points of the night, and the hosts extended their advantage to 20 later in the first half. The visitors made a run at the end of the second quarter and into the third, but Big Red regrouped and built its lead up to as many as 31 points in the fourth.

“Early on, we were giving them multiple chances on every possession, and we did not fight back,” East Liverpool (9-5) head coach Bryian Burson said. “Steubenville is too good of a team to get off to a start like that against. I’m not taking anything away from Steubenville or saying the outcome would have been different, but this was our fifth game in eight days, and it looked like it.”

Big Red tallied double digits in all four quarters, while limiting East Liverpool to single digits in three of the four frames.

“Aubrey Thompson does a lot of the dirty work on defense,” Lombardo said. “She does a good job of getting us into our offense. She stepped up on the offensive end tonight. It was nice to see her have some offensive production tonight.”

“We play 10 or 11 games in like three-and-a-half weeks,” Burson said. “With the exception of the first week of January, we play three games a week. We have to get through it. We are just playing so much. Like every other team, we are dealing with kids who are sick or tired. We just have to fight through it.”

After scoring the first six points, the victors extended their advantage to 14-6 before taking a 16-7 lead at the end of the first.

Big Red continued to increase their advantage in the second, as a free throw by Madison Fields gave her team a 29-9 lead. Big Red led, 29-12, at halftime.

“They had the size advantage, and size is usually where we excel,” Lombardo said. “We do a good job inside. Tonight, we were able to hit some jumpers, and we were able to get to the free-throw line. We knew it was going to be hard to get the ball inside, so our game plan was we wanted to pressure them get some steals and get out in transition. We were able to get som easy looks on the break, so we did a good job with it.”

The Potters tallied the first five points of the third quarter to pull to within 29-17, forcing Lombardo to call a timeout.

Big Red responded and pushed the lead back up to 16 points before a 3-pointer by Ludwig brought the Potters back to within 11 at 34-23. However, that was as close as East Liverpool got the rest of the way. 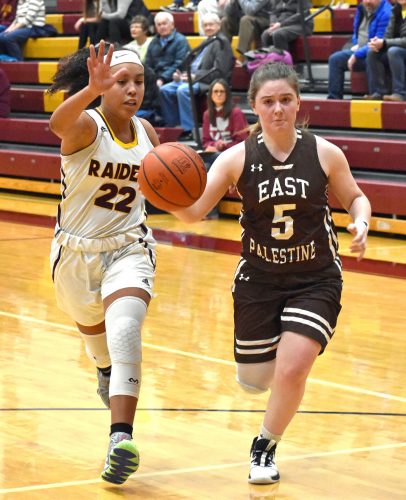