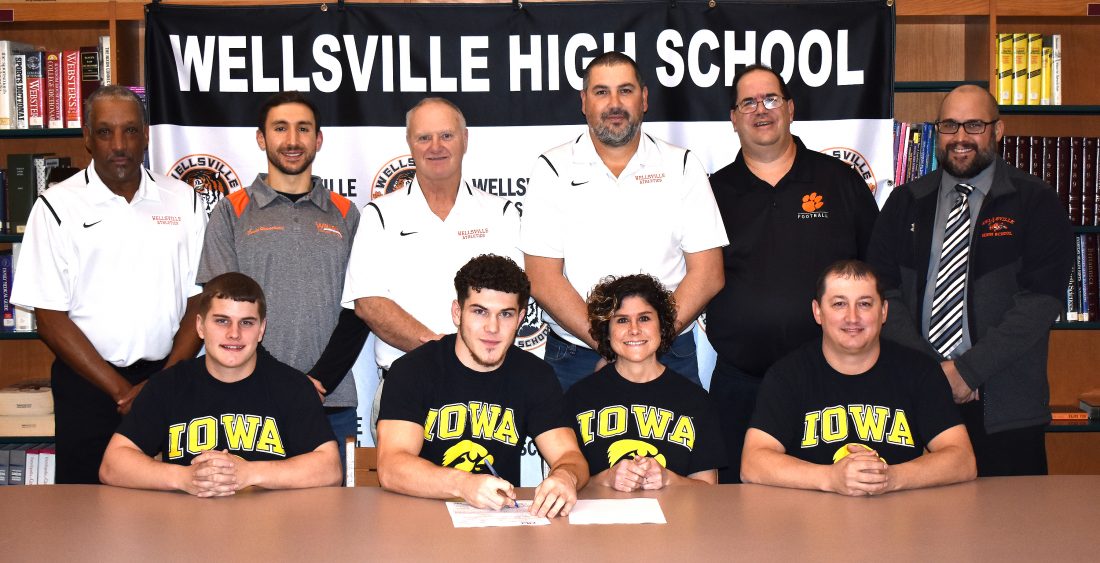 WELLSVILLE — Wellsville’s Justin Wright won Division III state titles in the 100-meter dash and long jump in June. But what he remembers most is the one that got away.

Wright is still six months away from getting another chance at adding more state track titles. He recently decided to continue his academic and athletic careers at the University of Iowa and made it official Thursday by signing a letter of intent with the Hawkeyes.

“It was definitely a tough decision being 10 hours away from my family,” he said. “I was looking to go to Cincinnati. I was going to go back to visit Ohio State. I went to YSU and it was very nice. I was going to visit Central Michigan, but it was too cold up there for me.”

Wright said he received a three-quarter scholarship from Iowa, a good chunk for the sport.

“It was not an easy decision,” Wellsville track coach Randy Thrasher said. “I think he fell in love with the campus and their facilities are absolutely top notch. He has a good relationship with the coaching staff there. He wants to go into the medical field and he checked out some of the things they do there. He really liked that, too.”

“The facilities there are one of the main reasons I chose the University of Iowa,” he said.

Wright missed being in the Wellsville basketball team photo on Nov. 16 because he was visiting the Iowa campus.

“It was cool and a great experience,” he said. “I went there to see what the student-athlete life was like and lived on campus a little bit before I actually decided to go there.”

Wright is one of the fastest sprinters in Ohio high school sports now.

Wright became only the second county athlete and first since 1922 to capture at least two golds and one silver as an individual at the state track meet.

He’s one of those athletes who don’t come around very often for coaches.

Wright is currently one of the top players on the Wellsville basketball team that should make a run at the Eastern Ohio Athletic Conference title.

“I just take it season by season,” he said. “But track is always in the back of my mind.”

“Everything was fun last year,” Wright said. “I’m just looking forward to the next year and my goals for the next year.”

“We’re expecting good things from him,” Thrasher said. “He’s thinking about doing a couple of indoor meets this year to see where he’s at and what he has to do to get better.”

There are still a lot of things Wright wants to accomplish before he leaves Wellsville High School.

“We’ll miss him,” Thrasher said. “But you know, the last couple of years the other kids have watched him and how he works and how he’s developed. It’s rubbed off on them.”

They will have to do it next school year without Wright, who will be out in Iowa.

“I hope I can further my athletic ability and academics,” Wright said. “I want to push myself to be the best I can be.”

¯ Wright is as focused on his academics as well as his athletics.

“I want to get a degree in exercise science,” he said. “I want to be a physical therapist.”

¯ During football season, Wright injured his jaw at United in the seventh week and was done for the season.

“It was more precautionary towards the end,” he said. “Football was all right. We came up on some injuries and the season ended not the way we wanted it to.”

“Coaching him this year in football, I’ve seen a little bit of improvement in his speed and abilities,” Thrasher said.

¯ Wright always draws a crowd in whatever sport he is participating.

“There’s some little kids from Wellsville who are really supportive,” he said. “It’s awesome.”

WHEELING, W.Va. — The OVAC saved the best for last. In a match featuring two top-10 All-Americans and previous ...