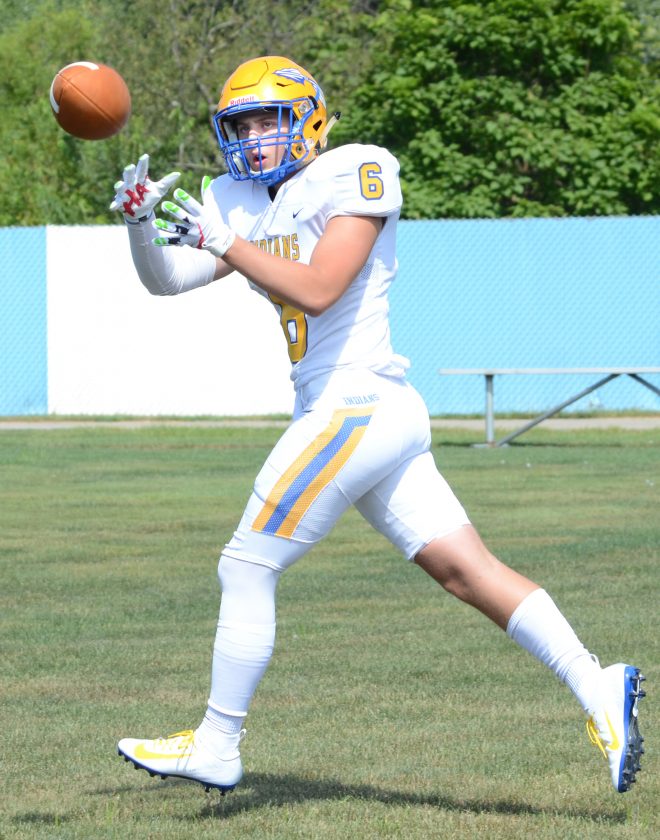 The Indians placed three players on the Division VI district first team with senior receiver Cam Grodhaus being named the offensive co-player of the year and Rich Wright the co-coach of the year.

Grodhaus was a big-play maker for the Indians, who averaged 45.4 points during the regular season. Grodhaus had 30 catches for 505 yards (16.8) and seven touchdowns, ran 34 times for 490 yards (14.4) and 11 touchdowns, scored two touchdowns on punt returns and another on a kickoff return.

He is joined on the first team by senior safety Jayce Sloan and senior offensive lineman Stephen Craig.

Sloan shined in the secondary, getting 33 tackles with four interceptions, returning two for touchdowns.

Craig was the leader of the offensive line as a four-year starter.

Miller was a relentless defender, piling up 91 tackles with 24 for losses and 13 quarterback hurries.

Cross was a two-way standout for the Clippers, totaling 83 tackles with 12 for a loss and three forced fumbles.

Walker, Brungard and Medvec led the Tigers to a 10-0 regular season and 15 straight regular-season victories.

Salem and Leetonia both had two first-team honorees.

Campolito totaled 130 tackles at middle linebacker and added 1,019 yards rushing at running back.

Despite missing the last four games with a broken arm, Suggs had 50 tackles and seven interceptions, returning two for touchdowns.

Craig is a four-year letterman for the Warriors and an outstanding lineman.

Allegretto passed for 1,415 yards and 19 touchdowns and ran for eight more touchdowns during the regular season.

Teams were selected by a media panel from the district.

The Big Ten and Pac-12 became the first Power Five leagues to shift to an all-conference fall schedule as the ...

EBC down to six schools

The Eastern Buckeye Conference has played with seven schools the last two seasons. Now the league is down to ...

Reyes’ first error was off the field

CLEVELAND — Franmil Reyes’ first error this season was in judgment. The Indians’ free-swinging slugger and ...