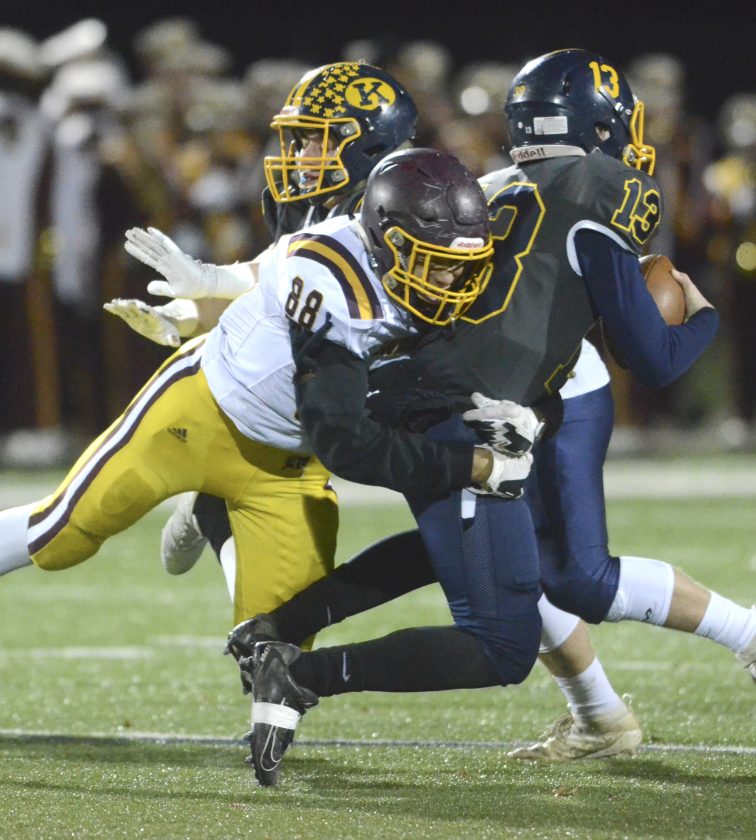 NILES — South Range coach Dan Yeagley acknowledged that his team had to play a perfect game Saturday if it was going to have any chance of beating Kirtland in a Division V, Region 17 semifinal game at Niles’ Bo Rein Stadium.

While the Raiders weren’t exactly mistake-prone by any means, their best shot wasn’t nearly enough.

Kirtland raced out to a quick 14-0 lead, withstood a second-quarter South Range surge, then ran away with a 38-7 win. The Hornets — the defending Division VI state champs and winners of 124 of their last 130 games — will now face Akron Manchester on Saturday at Bedford Bearcat Stadium in the Region 17 title game.

Kirtland lifts its record to 12-0. South Range ends its season at 8-4.

“You just have to play perfect against Kirtland, because they have so many weapons and they don’t make mistakes,” Yeagley said. “They understand playoff football. They aren’t fazed by this type of atmosphere.

“I thought we came in nervous, just like we did last week. We had to settle down, which we did, but by then we were in a hole.”

The hole Yeagley referred to was a 14-0 deficit. Kirtland scored on its second play from scrimmage, then scored again on its second possession to quickly take a two-touchdown advantage.

After South Range went three-and-out on the game’s opening drive, Kirtland took control of the ball at its own 43. A one-yard loss on a running play moved the ball back to the 42, but on the next play Luke Gardner raced 58 yards to give the Hornets a lead they would never relinquish.

Kirtland’s second possession resulted in a nine-play, 76-yard drive which was capped by a Gardner 12-yard run to paydirt.

Gardner finished the night with four rushing touchdowns. He carried the ball 21 times for 200 yards.

Mason Sullivan scored the other Kirtland touchdown. He rushed for 160 yards on 23 carries.

As a team, Kirtland churned out 400 yards, including 356 rushing yards.

“Those are two outstanding backs, and they present two different dimensions,” Yeagley said. “(Sullivan) will pound the ball at you and (Gardner) uses his speed. The offensive line is really good and they are well-coached. They have the entire package.”

Despite its early deficit, South Range fought back to cut the Kirtland lead to 14-7 midway through the second quarter. The Raiders put together a 68-yard, 11-play drive which ended with a Michael Patrone four-yard touchdown run.

The 14-7 score held up for the remainder of the first half.

“Our kids kept fighting, they never gave up and they put themselves back in the game before halftime,” Yeagley said.

However, like it did in the first half, Kirtland struck quickly to start the third quarter. The Hornets took the opening possession of the second half and drove 63 yards to take a 21-7 lead. From there, they were able to pull away.

“That touchdown to start the third quarter was huge,” Kirtland coach Tiger LaVerde said. “We were only up by seven at halftime after playing a really good first half. South Range is so very well-coached and we were nervous about having them hang around.

“In that third quarter, we went back to doing what we do. We established our running game and were able to get some distance between us and them. We survived another week, and in November that’s all you hope for.”

South Range struggled to gain any offensive momentum throughout the night. The Raiders finished with just 114 total yards on offense. The running back tandem of Dylan Dominguez and Patrick McCabe, who led the running attack all year, were held to 27 yards and 23 yards, respectively.

Patrone, filling in for the injured Isaac Allegretto at the quarterback position, threw for 34 yards.

Despite the setback, Yeager said his team should be proud of its many accomplishments.

“We did a really nice job in our first year in the Northeast-8 Conference,” Yeagley said. “We won a home playoff game, which was huge for the community. This team has so very much to be proud of.

“Our seniors are a special group. We have an awful lot of younger players on this team and the seniors showed them the way it is done. Now hopefully that next class of seniors will take the baton and run with it.”

Ironically, South Range also suffered its last regular season loss at Bo Rein Stadium. On Oct. 4 the Raiders lost to Niles 35-34 in overtime. They then won five straight before being stung by the Hornets.

YOUNGSTOWN - Interim Executive Director of the OHSAA Bob Goldring said Tuesday that it will be up to the individual ...

Football to the spring. It's flown off of people's lips and on their social media accounts. With the COVID-19 ...