Well, most coaches take different approaches to it than Hake, a fiercely intense person on and off the field who isn’t afraid to share his views with anyone.

Guerriero is more reserved and understated. He channels his intensity in a different way, with a tactical focus that’s working quite well for unbeaten Springfield.

While their methods may be different, their teams are similar.

Springfield, which has enjoyed winning seasons in six of the last seven years, is facing a Western Reserve team that has reached the playoffs nine of the last 11 years. Two programs with years of success meet for the second time this season in a Division VI, Region 21 first-round playoff matchup at 7 p.m., Friday in New Middletown.

“This is what football is all about, so we’re going to have fun with it.”

Both teams are looking to have some fun.

The Tigers (10-0) have been one of the area’s most impressive teams, motivated after a 9-1 season in 2018 that didn’t result in a playoff berth. Led by a group of determined seniors and a star sophomore at quarterback, Springfield won the Mahoning Valley Athletic Conference and earned the No. 1 seed in the region with an undefeated regular season.

It all won’t mean as much if they can’t put together a playoff run. It starts with what looks like an old-school, hard-hitting matchup against the Blue Devils (8-2).

“Anytime you get the weather coming in during the playoffs, you have to (run the ball),” Guerriero said. “With coach Hake, he’s going to have his kids ready and fired up. They’ll be ready to play smash-mouth football. Our kids have to be ready for the challenge.”

Each team possesses the personnel to play a run-heavy style.

The Tigers have three backs with more than 300 yards rushing, led by Austin Tindell, who has 606 yards and seven touchdowns on 73 carries. Standout quarterback Beau Brungard, the son of former YSU quarterback and Poland coach Mark Brungard, adds 545 yards and 12 TDs on 53 carries (while also completing 84-of-122 passes for 1,506 yards, 19 TDs and two interceptions). David Duvall has 337 yards and seven TDs on 66 attempts.

They’re also big up front with a senior-laden offensive line. Hake is well aware of the strengths of Springfield, which turned a 7-6 game in the third quarter into a 35-14 victory in Week 9.

“They scored 21 in the fourth, and it got away from us,” Hake said. “We need to play better down the stretch. They’re quicker than us, so we have to play fiercer. We can do it. We have the guys to do it.”

Both defenses are allowing less than 12 points per game (Springfield at 11.2 and Western Reserve 9.1), and the coaches agreed the battle in the trenches will be pivotal.

“You’re going to win with the guys up front, so I give credit to our guys on the line,” Guerriero said. “… We’ve got a good group of kids that are unselfish. If they’re not touching the ball, they’re blocking or doing what they have to do to be successful.”

That’s one of many similar traits each team possesses.

A pair of coaches and teams that have mutual respect will be playing with plenty of disdain on Friday.

“Their defense is fast,” Hake said. “Their offense is fundamentally sound. Their quarterback is an all-timer, and we’re going to have to play the game of our lives to get through this thing, but I expect to win the game.” 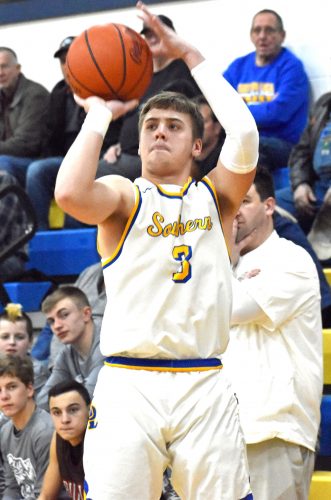 From Staff Reports BERLIN CENTER — Lisbon made 15 of 21 free throws in the fourth quarter to hold off Western ...