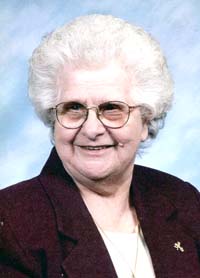 The daughter of the late William J. and Rebecca (Nesbit) Williams, she was born in Ernest, Pa. on March 21, 1923 and lived most of her life in the East Liverpool area.

She was a graduate of East Liverpool High School and a member of the First United Methodist Church in Chester. She and her husband had been the owners of the former Dew Drop Inn back in the 1960s and had retired after 30 years from the former Hills Department Store.

Services will be 3 p.m. Thursday at the Martin MacLean Altmeyer Funeral Home in Calcutta with Pastor Jason Pancake officiating. Burial will follow in the Calcutta Cemetery. Friends may call three hours prior to the service.

Memorial contributions may be made to St. Jude Children’s Research Hospital.