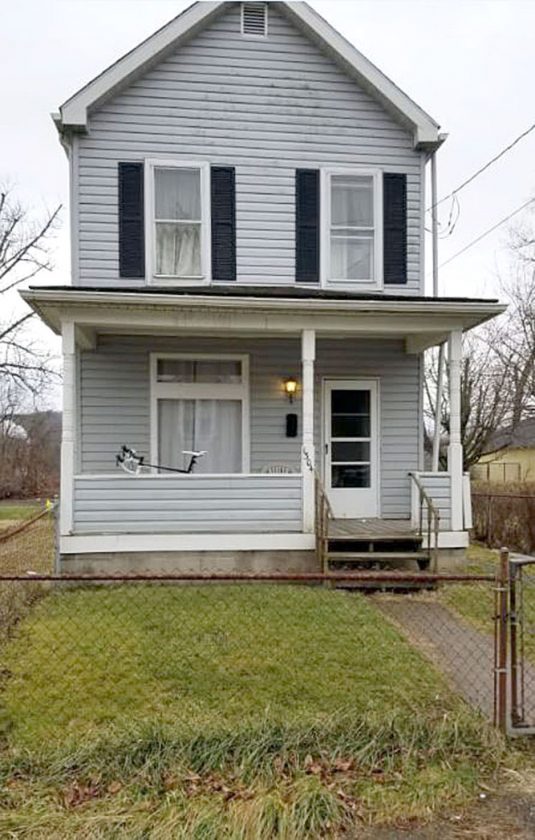 Special to the Journal/ELPD This home owned by Bradley Anthony at 1304 Erie St., East Liverpook, was the site of a search warrant as part of a drug investigation. Andre L. Owens, of Warren, was discovered lone in the residence along with crack cocaine, opioids, digital scale and $490. Additional charges may be pending against Owens, who was charged with possession of drug paraphernalia, depending on crime lab results.

— A Kelly Park Road, Fairfield Township, man had reported at 10:28 a.m. Jan. 18 someone had opened one of his trail cameras and ejected the memory card. Deputies followed up on Saturday and the man said between Feb. 8 and Feb. 11, someone had moved the camera 45 degrees to the north, but no one is visible. All he can see is pictures where someone was disturbing the water where the camera is located.

— Mark Berresford, 63, of East Rochester, was cited for failure to yield from a private driveway when he struck Nikole Cooke, 17, of Columbiana, who was traveling on Speidel Road in Hanover Township at 2:02 p.m. Saturday.

— Police were called to a domestic dispute at the apartment complex on Moore Street at 2 p.m. Monday, where the woman in relationship said they had been arguing over the children, nothing more. They spoke to the boyfriend and his story matched hers.

— An officer responded to Firestone Avenue along with EMS for a report of a man suffering from an overdose at 2:57 p.m. Saturday.

— Police responded to East Park Avenue for a reported overdose at 5:22 p.m. Saturday.

— A McClain Road resident reported Saturday someone took her garage door opener from her car.

— Matthew Wharton, of Chester, W.Va., was arrested at 2:11 p.m. Sunday on a driving under suspension charge, after a traffic stop.

— QueySean Sallis was arrested at 11:22 a.m. Sunday in the 2400 block of Homestead Avenue for possession of pot,

— An emergency squad was dispatched at 9:35 p.m. Saturday to a drug overdose.

— Lori G. Smith, of Lewis Road in Salineville, was cited at 3:26 p.m. Feb. 9 in the area of West 8th and Lisbon streets for a red light violation, after a two-vehicle accident.

— Sean J. Sanchez, of Bergholz, was cited at 7:03 p.m. Feb. 7 in the area of St. Clair Avenue and Hill Boulevard for assured clear distance and driving under suspension.

— Afton B. Danver, of Globe Street, was cited at 1:05 p.m. Feb. 11 in the area of the cloverleaf for assured clear distance, after rear-ending another vehicle.

— A vehicle parked on Sixth Street near Monroe Street was sideswiped shortly before 3:10 a.m. Feb. 7, causing damage to the side panel, a broken mirror and punctured tire. The offending vehicle fled the scene.

— A vehicle with a broken axle or tie rod on the front driver side tire, which had been left on Virginia Avenue in front of a church, was towed at 9:33 p.m. Saturday.

— An officer responded at 11:06 p.m. Monday to the first block of McKinnon Avenue for a juvenile complaint.

— A Peach Alley resident requested harassment charges against a subject who had called him names at 11:07 p.m. A report was done, and he was told by the officer that someone being mean to him wasn’t criminal.

— A resident in the 1000 block of Huston Street reported at 7:39 p.m. Saturday that a vehicle had been abandoned on her neighbor’s property for two years.

— A subject was not charged at 2:26 a.m. Friday in the first block of West 8th Street when officers conducted a stop as the license plates were switched. He was given a verbal warning.

— No citations were noted on a report for a crash at 6:19 p.m. Saturday near Tim Horton’s.

— Crews responded to a possible drug overdose at 12:26 p.m. Thursday in the Quality Inn, and arrested Paul Lee Beaver on a charge of obstructing official business. Beaver had been in the company of the overdose victim and possessed a white folded-up piece of paper with a white powder in it. The overdose victim, Brian W. Specht, no address listed, will be charged with disorderly conduct.

— Police were dispatched at 1:27 p.m. Sunday to the first block of Annesley Road for a single wide mobile home blocking the entire roadway.

— Dakota Robinson was arrested at 6:40 p.m. Sunday in Walmart on a theft charge, after allegedly failing to purposely not scan several items that he bagged at the self-checkout lane.

— A female caller reported at 10:27 p.m. Monday that she had taken her dog to an ex-boyfriend’s house in the 50000 block of Stagecoach Road, where he allegedly bit the resident who had been teasing him. She wanted to incident documented.

— Lonny Adkins, no address listed, was arrested at 9:30 p.m. Sunday in the first block of Annesley Road on a charge of driving under FRA suspension, after LEADS revealed his invalid driving status. Despite emitting an odor of alcoholic beverages, he passed field sobriety tests.

— Ashley Ross, no address listed, was cited at 8:11 p.m. Sunday in the first block of state Route 170 on charges of no operator’s license and a violation for a cracked taillight.

— An employee of Domino’s reported at 5:08 p.m. Sunday that sometime between noon and 1 p.m. an unknown subject had taken $100 out of her purse without permission.

— Michelle Lane, no address listed, was arrested at 4:11 p.m. Sunday on a charge of petty theft, where she allegedly failed to scan several items in the self-checkout lane and bagged them.

— A driver was not cited after her vehicle went off the right side of McGuffey Drive at 8:30 p.m. Wednesday and slid into the ditch due to weather conditions.

— Sally Jo Stanley, of Leslie Road in Lisbon, was cited at 1:04 p.m. Feb. 11 for failure to control, after her vehicle slid off Bell School Road.

— Police responded at 5:34 p.m. Monday in the 50000 block of Grimms Bridge Road for a single vehicle over an embankment.

— David W. Fonner, no address listed, was arrested at 7:20 p.m. Monday in the first block of Parkway Avenue on charges of improperly handling firearms in a motor vehicle, possession of marijuana and failure to signal. According to the report, an officer initiated a traffic stop for the turn signal violation after leaving seeing the vehicle leave a known drug location. The driver and two occupants declined consent to the search the vehicle, so K9 Noras conducted an open air sniff and alerted on the vehicle. A black Taurus handgun was found between the driver’s seat and center consule and Fonner didn’t possess a concealed carry permit. The marijuana and extra ammunition for the loaded gone was also discovered in that location.

— A probable road rage incident was reported at 9:19 p.m. Sunday in the area of state Route 267 and Irish Ridge Road. Stacey Dawson, of Y&O Road in Wellsville, told officials that she had slowed down to avoid pot holes in the road and was rear-ended by Kayla Roberts, of Cornell Street. Roberts alleges that Dawson jammed on her brakes, causing the incident. Officers could not identify any skid marks related to the accident, the officer noted in the report.

— Kassandria Cole, 28, of Washingtonville, was taken into custody on a warrant out of the county for failure to appear after police stopped her vehicle for a traffic stop on West State at 8:47 p.m. Monday. She was taken to jail.

— Police were called at 3:52 p.m. Monday to the 1300 block of West State Street where a resident said a male who used to live there punched a hole in the wall. Because he had been a resident, officers said it’s a civil issue. Police contacted the male who said he no longer wished to live there and moved in with a relative.

— Township officers and Salem Police responded at 3:07 a.m. Tuesday to an address in the 1800 block of South Lincoln Avenue to speak with a male involved in a domestic within the city. The male was transported to the hospital by KLG for injuries. Salem Police obtained all information and cleared.

— Police were called at 2:55 a.m. Tuesday to the 100 block of West Eighth Street for a domestic dispute, with the two people involved at different locations. Police noticed damage to the front door and a motor vehicle, however, the homeowner was told the damage would have to be resolved through a civil matter. Due to conflicting stories and being unable to determine who was the primary aggressor, police took statements for the report. Perry Township police made contact with the other person who was later taken to SRMC. Information will be sent to the prosecutor’s office.

— Kerri Steffel, 32, last known address Barclay Avenue, was charged with domestic violence and also taken into custody on a warrant for failure to appear on a previous domestic violence charge after police were called for a domestic in progress on Barclay and Maple at 12:47 a.m. Tuesday. A caller reported a male in a truck and a female walking screaming at one another. The truck was found parked on Park Avenue. Officers learned a physical altercation took place at a residence in the 900 block of Barclay. Steffel was found to be the aggressor and was taken to jail.

— An anonymous person contacted police from another state at 10:45 a.m. Monday to report having been a victim of sexual assault at a residence in Salem between 2016 and 2018. Information was gathered for an investigation.

— Police spoke with a man from Ohio Avenue at 5:29 p.m. Monday regarding a possible scam taking place with his mother. The report said it was not apparent if the matter was a scam or not and will be investigated further.

— Firefighters responded to Walmart after receiving a call from an employee at 4:38 p.m. Monday about a fire inside a van in the passenger compartment. Firefighters found what appeared to be a candle burning in a sink of a 1980s RV. Police tracked down the owner inside. Firefighters made entry through an unlocked rear door and put out the oil lamp that was in the sink burning. A dog inside was not injured. According to the police report, the owner advised the lamp was left lit to provide heat for the dog. The owner was advised of the serious risk and to not leave unattended open flames in a vehicle.

— The fire department was called to the home of Marilyn McCullough, U.S. Route 30, at 4:21 p.m. Monday because she had a foot of water in her basement.

— Firefighters were asked by an ambulance crew to help with a lift at a Brown Street home at 12:41 p.m. Sunday. They called back to cancel the call after the EMTs were able to get the woman onto the cot.

— First responders were called to a home on McCormick Run Road at 11:10 a.m. Sunday for a teenage girl who was having a seizure of some sort.

Sheriff’s Office —While on patrol in West Point at 7:11 p.m. Thursday a deputy saw some children playing in ...

SALEM — A Salem man accused of assaulting a woman and pointing a gun at his own 11-year-old son during a domestic ...

County Sheriff — Deputies received a tip at 9:57 a.m. Friday about a vehicle stolen overnight from the ...

Highway Patrol — Dana Flaherty, 22, Birch Road, East Liverpool, was cited for failure to yield after she ran a ...