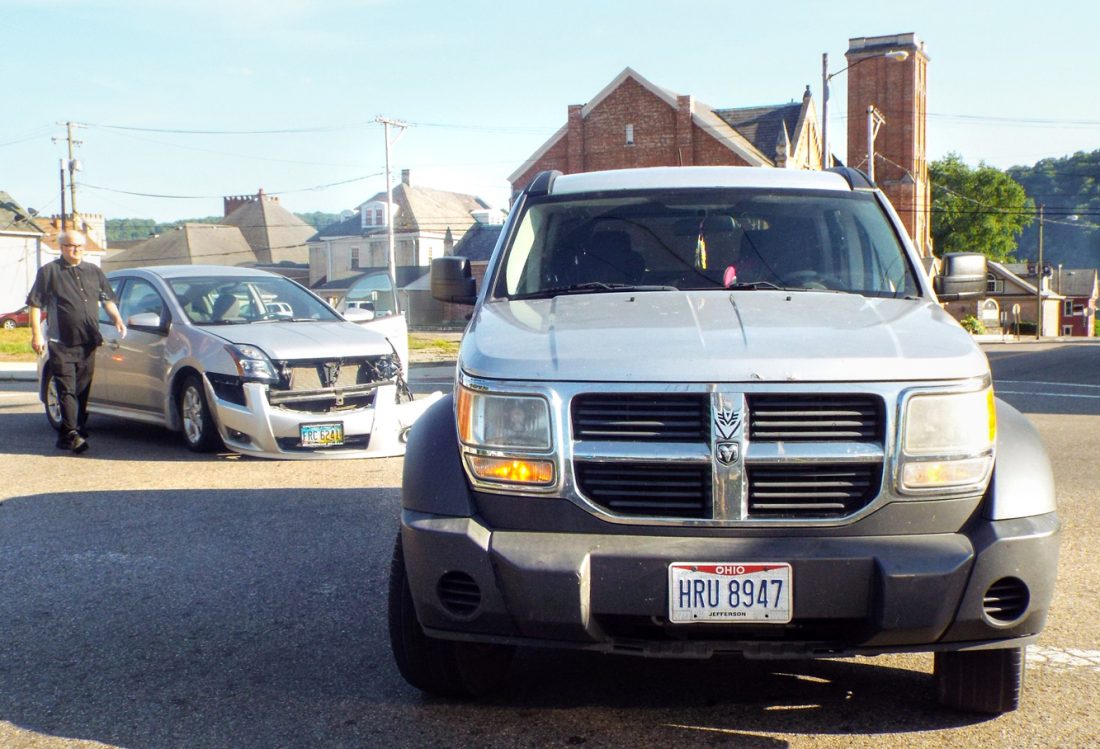 Morning Journal/Stephanie Ujhelyi Two vehicles sit where they landed after a two-vehicle crash at the intersection of 6th Street and Jefferson Saturday afternoon.

Police Chief John Lane explained that doing more with much less is something he and his officers have gotten used to doing.

This reporter accompanied the city’s two assigned police officers on afternoon shift last Saturday afternoon, as they tried to keep law and order in the city on the Fourth of July.

There was plenty of fireworks complaints; however, officers found themselves plenty to do without them.

Cities twice as big typically find themselves with three times as many officers on shift. But officers Tony Savina and Justin Watkins found themselves holding down the fort for East Liverpool’s population of 10,713 residents.

When not being sent on calls by dispatch, both officers spent their time patrolling city streets, which are divided into three zones: LaCroft (typically the quietest), downtown and East End.

Watkins explained, “Ninety-nine (99) percent of the action happens in the other two zones,” as he proceeded to check on an accidental alarm drop at the ATM being the future Renovatio’s restaurant before venturing up to a preliminary sweep of LaCroft streets at the start of his shift.

Within the hour, he found himself, returning to the same ATM as the worker concluded his maintenance on the device and set the alarm off again before exiting.

Officers in general have to be superb multi-taskers, often monitoring activity in their environment, as they are punching in license plates into an in-cruiser laptop while operating a vehicle.

During the first four hours of his shift, Watkins responded twice to the intersection of Sixth Street and Jefferson Avenue.

The first was a proactive traffic stop of a gold Mercedes bearing temporary tags with two unlicensed occupants. After stopping the car. Watkins found himself citing Rutter and waiting with the occupants until a licensed driver could retrieve the duo.

Again, within the hour, he would be back to investigate a traffic crash, resulting from a subject running a stop sign at the intersection. Frustrated neighbors claim it is not an unusual occurrence in that area, as they fetched brooms and dustpans to assist officers with sweeping up debris as they waited for the tow truck.

Like Watkins, there wasn’t much time for Savina to do proactive policing with the department being so short on manpower.

Calls from dispatch included ATVs operating illegally on streets, a runaway 11-year-old entering retail establishments and claiming abuse by parents, and a reckless driver on the east end.

In that last incident, Watkins happened to be nearby and executed a traffic stop on the vehicle. The driver, who allegedly had not only sideswiped the victim’s driver’s side mirror but took out a guardrail in Pennsylvania before coming into East Liverpool from Ohioville, said that the aggressor was the victim, who forced her into that guardrail.

Watkins arrested Sondra L. Curtis of Midland on a charge of OVI, after she performed poorly on field sobriety tests and officers found an empty bottle of whiskey in her vehicle.

Officers took Curtis back to the station for booking and to meet her ride; however, had to cite her under a lesser code section of the Ohio Revised Code as they couldn’t actually get breath sample readings.

Apparently the breathalyzer has been in the shop since before the coronavirus hit.

Chief Lane did verify Monday that the state collected the device back then, alleging a software issue, which leaves them the choice of either doing testing at another department or utilizing the department’s two portable breathalyzers.

Those devices, while being able to establish probable cause to get results via blood, urine or the desktop unit back at the station, is not admissible for trial in the state of Ohio as the lone evidence.

This is why most departments follow up with the desktop unit 20 minutes after the stop in a more controlled environment.

Subsequent calls riding shotgun with Savina included a man down in front of the downtown Dollar General entrance, where a small concerned group had gathered.

Carl Morris of West 9th Street, allegedly decided to catch a nap approximately an hour before the Chester fireworks were set to go off. He was taken to his residence by police for his safety and told to stay in, after he was charged with public intoxication.

No time for the weary, as cars and lawn chairs lined the Ohio River and downtown to view Chester’s fireworks display as both officers were dispatched to Riverview Towers for a female streaker on the third floor.

The majority of residents had gathered outside to watch the view from their yard, and officers were able to catch the last few minutes of the fireworks after failing to make contact with her inside before going back to the station to work on their paperwork.

Days after a reporter spent a Saturday afternoon shift with the two officers on the Fourth of July, Chief Lane cleared up a few public assumptions about the department’s budget.

Police in other communities routinely represent the bulk of a municipality’s budget as personnel, equipment and training tends to be costly.

In East Liverpool, with the city’s money woes — even with the traffic camera revenues in place, Chief Lane struggles with meeting staffing, equipment and training needs.

For example, Watkins drives one of the oldest cruisers in the fleet. The seven-year-old vehicle had a chipped windshield, cosmetic damage to the inside driver’s side door, a clunky front right axle in need of repair on a cruiser with around 150,000 miles on it,

In comparison, Savina drives one of the department’s new cruisers, a two-year vehicle with just more than 15,000 on it and a backup camera on it.

In all probability, Chief Lane’s request for two new cruisers won’t materialize due to the city’s budget situation.

Lane is looking at grant options to upgrade the body cams, which the city purchased from a sister company of the traffic camera vendor and now has to pay $1,200 a month just for the off-site storage of the data.

In today’s society, he acknowledges the cameras are a must under the best of circumstances, and his officers work under extremely difficult situations given the lack of drug investigators and the officers at a given time.

For example, while Savina worked his afternoon shift and called it a day, Watkins found himself working a double due to a lack of manpower.

As Governing.com, a website for state and local government, details the growing phenomenon among law enforcement agencies, this creates a safety issue for police officers.

“A small but growing body of research links long hours and officer fatigue to a host of public safety” for the most routine tasks, such as maneuvering a police car, making split-second decisions and de-escalating situations sometimes in the middle of a 16-hour shift.”

LISBON - Never during his five-plus years in office did state Rep. Tim Ginter ever think he would be a candidate ...

SALEM - The city administration is working to relocate the veterans memorial from the corner of Lincoln and State ...