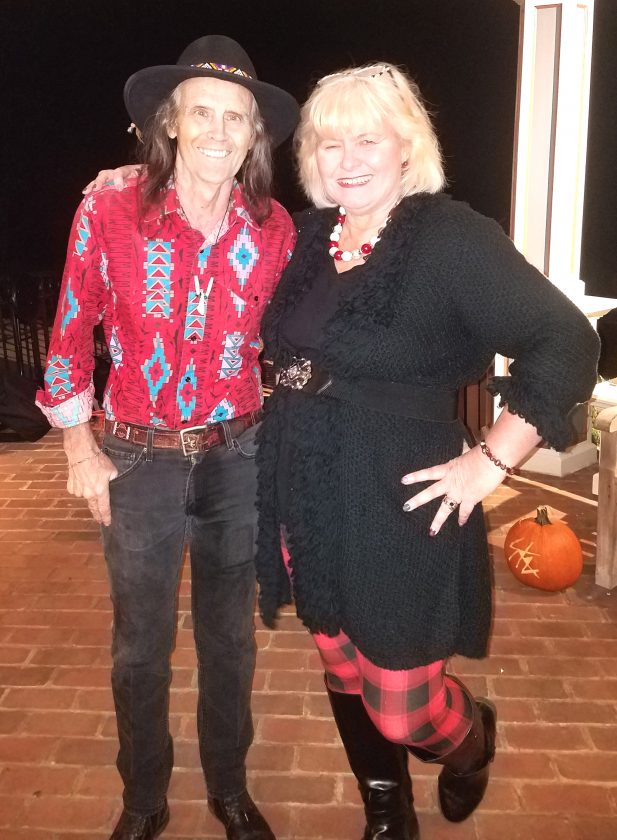 SALEM — Internationally-known, award-winning singer/songwriter Steve Free will bring his folksy, easygoing music to a patio rooftop in downtown Salem from 7 to 10 tonight at Liebe Wein.

For Salem resident and businesswoman Vicki McGee of Simply Scarves and Such, it’s just going to be an evening hanging out with a friend.

“I really like him personally and professionally,” she said.

A chance meeting between McGee and the Grammy-nominated recording artist last year turned into a fast friendship. That bond has now become an opportunity for area residents to enjoy Free’s style of music in person. “He’s so popular everywhere. I just wanted to showcase him. It’s a big deal that he’s coming,” McGee said.

She partnered with Rich Snyder of Liebe Wein to make the appearance possible. G & G Concessions of Salem will provide a food truck and hotel accommodations are being provided by Holiday Inn Express of Salem. There will be a meet and greet, too.

The plan is to hold the concert outside, with Free singing from the roof and the audience on the back patio at Liebe Wein.

Free invited residents to come and enjoy the show, promising to play most of his original songs. He also plans to introduce some of his new music featured on his next album due for release in a month.

“We’ll have a good old time,” he said when contacted.

He’s been compared to John Denver and Neil Young, but said his music has been influenced by Bob Dylan.

He’s a native Ohioan, born and bred, and a Native American, living in the Portsmouth area near the Shawnee Forest, his ancestral hunting ground.

Free, who’s been writing and playing music the past 35 to 40 years, plays guitars, harmonica and the Native American flute. Last year, he was named Best Folk Artist by a British magazine, so he said he decided to focus on folk music for the new album.

One song in particular hits close to where he lives, a fiddle tune that recalls the legend of a peddler who used to travel with pots and pans on his back all through the Shawnee Forest area who played the fiddle. One year he didn’t come back and was later found dead in the forest, buried not far from where Free lives.

According to Free, the legend is that if anyone goes back there on a dark and stormy night, “you can hear him playing the fiddle.”

Free will be accompanied by his son, Dakota, who also plays guitar.

This will be Free’s first time in Salem, but he’s been playing at Fellows Riverside Gardens during the pumpkin walk in the fall and played at Alchemy Acres’ Whispering Pines Castle last August, which is where he met McGee when she had a booth there.

They started talking, along with their spouses, Free’s wife Susan and McGee’s husband Bill, and saw each other again in October at Fellows Riverside Gardens. They communicate mostly through social media. Both were looking forward to the show this weekend.

According to the description on Free’s website at www.stevefree.com, he’s a winner of nine American Society of Composers, Authors and Publishers (ASCAP) awards, a platinum record and a Grammy nomination, and charted more than 30 songs on the National and International, Americana, Country and Billboard Charts, with 15 number one songs.

He has received many honors, such as International Independent Recording Artist of the Year in 1996, the Governor’s Award as the number one artist in Ohio in 2008 and as an official Ohio treasure in 2009.

He was also honored by the Kentucky State Senate for his musical contributions to Appalachia.

Free also does appearances at schools as an Ohio Artist On Tour with the Ohio Arts Council and Midwest Arts Council.

He wrote a song about the 1993 Ohio prison riot at Lucasville which was featured on a segment of “48 Hours” and wrote a Christmas song, “Just a Baby Boy” for a Christmas card he sent to radio stations for playing his music and it became a hit covered by choirs all over.

If someone requests to hear it Saturday, he said he’ll play it.

To learn more, check out Free’s music on his website or social media page.

LISBON - Never during his five-plus years in office did state Rep. Tim Ginter ever think he would be a candidate ...

SALEM - The city administration is working to relocate the veterans memorial from the corner of Lincoln and State ...