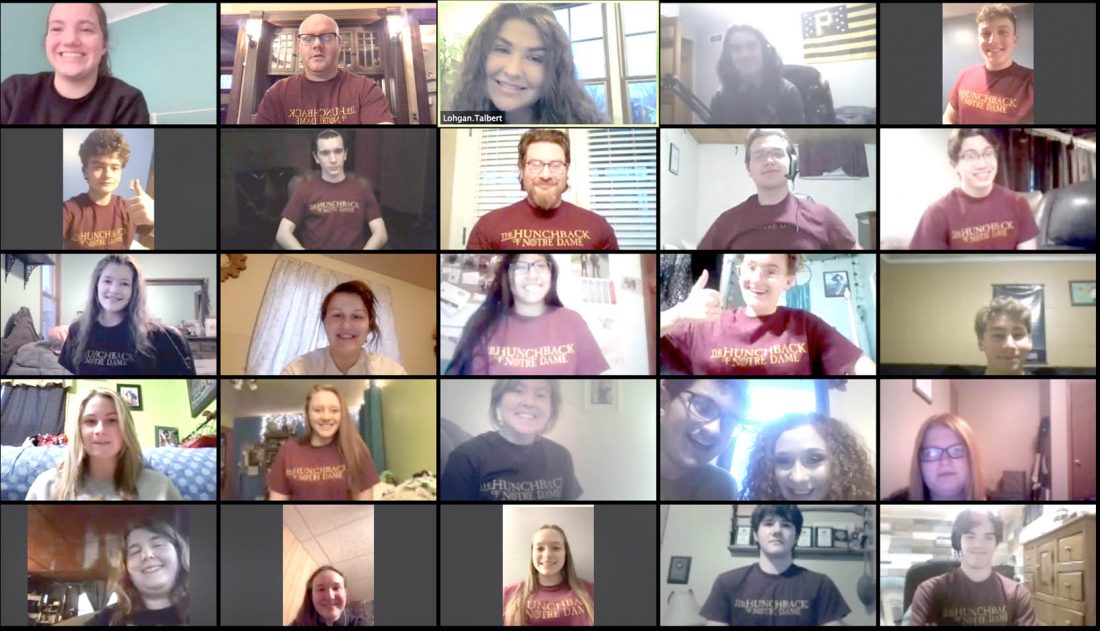 NEW WATERFORD — This past weekend the stage in the Crestview’s Performing Arts Center should have been filled with the Festival of Fools and the sound of the ringing of the bells of the Notre Dame Cathedral, but not unlike many of the best plans this unusual spring, the performances of “The Hunchback of Notre Dame” were postponed.

But despite being separated for nearly three weeks by the governor’s orders to close the schools due to coronavirus, the students and drama teacher Eric Bable continue to practice and refuse to let go of the chance to perform the musical.

“I’m hoping this all plays out in a couple of weeks. It’s killing me,” Bable said. “This group of kids is absolutely outstanding, not only for their commitment before, but their continued dedication now.”

Bable said the students are now logging into an online option to rehearse their lines and practice the musical numbers together.

“They seem so excited just to be together, even remotely,” Bable said of the students participating in these different practices conducting online. “They do something each day and just to see their faces.”

Bable praised the cast for its dedication, including one cast member, Jarred Kalina, who he said has been huge in setting the example for work ethic and commitment for the rest of the cast.

Kalina agrees getting together online using Zoom to rehearse some of the solos, duets, smaller musical numbers and go through the scenes has been really different for all of them. While there is sometimes a lag when too many students are logged on at once, Kalina said the best part is getting a chance to see his friends and even just “goof around” for a few minutes each day.

Playing the lead, Quasimodo, was supposed to be the big moment of his senior year, Kalina said. Although he said he played soccer on the team that went to the district finals, which was exciting, to him this was bigger.

“We are all really excited about the show,” Kalina said. “We put in so much work. We’re excited we’re still going to get our chance.”

They are hoping that possibly Mother’s Day weekend could be their chance to share their hard work and talents with the community. But the current situation has left even that date up in the air. Bable said the students are even telling him they are committed and willing to come back in the summer for the performance if need be.

They have been ready since before all this happened. Bable said even more than other performances in the past, this dedicated group was already prepared and ready to go forward before it was called off.

“It got called off the week before,” Bable said, adding the 20-piece orchestra, which was invited to perform in the show was ready to come in that week and put the last pieces in place. “We are ready to do it … Our show will go on.”

This show also represented a way to give back for the students. Lohgan Talbert, a junior playing Esmerelda, had contacted this reporter about a month before the production was to occur to let people know they had decided to donate part of the proceeds to the rebuilding fund following the fire at the actual Notre Dame Cathedral.