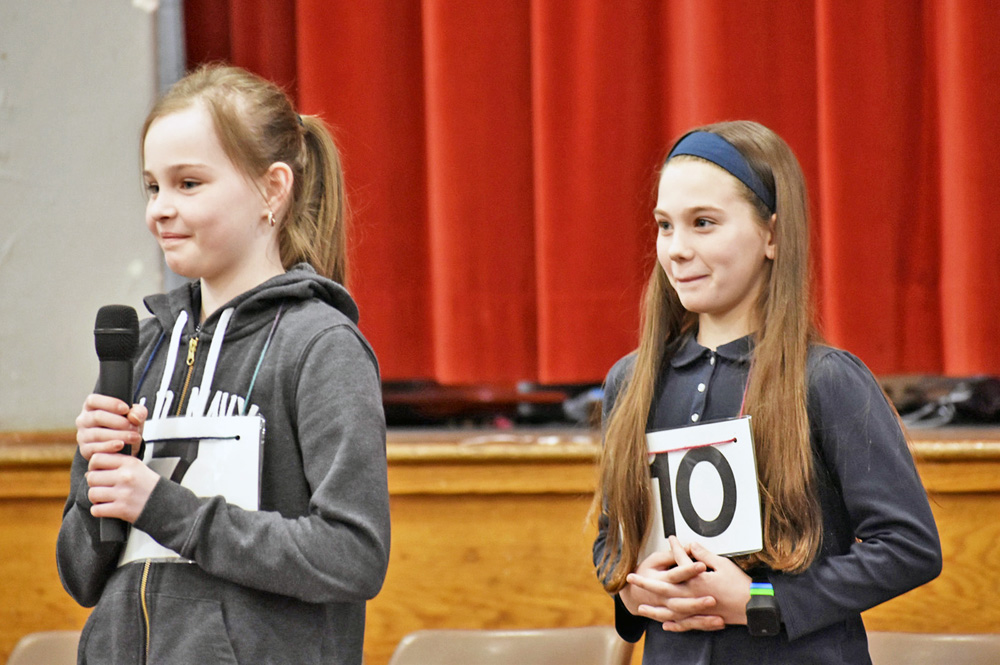 SALEM — Best friends Lydia Shasteen (left) and Delaney Sell (right) and battled each other in the last few rounds of the St. Paul School spelling bee, but when Sell correctly spelled “abandon” for the win, both left the gym smiling. “I’m very excited,” Sell said amid hugs from Shasteen. The fifth graders were the two left standing after four rounds of spelling Wednesday afternoon. When Shasteen missed on “squirm,” Sell missed on “treadmill,” so they both continued. Shasteen correctly spelled “crayon” and Sell correctly spelled “cowlick,” then Shasteen missed on “turnip.” Sell correctly spelled “permafrost” and then “abandon” to become champion and represent the school at the county bee on March 4 in Lisbon. Shasteen, awarded second place, will serve as the alternate. “I’m going to help her study,” Shasteen said. Sell’s other words included “glimmer,” “cartoon” and “theme.” Shasteen’s words included “bother,” “knock” and “whisk.” Sell’s grandma took her shopping and said random words that she had to spell as part of her preparation the night before. She also prepared for the bee by studying with her mom. She is the daughter of Julie and Christopher Sell. Shasteen is the granddaughter of Mary and Gary Shasteen. Other participants in the spelling bee were fifth graders Chloe Angelo, Ava Juggenheimer, Liliana Huzyak, Kaiden Curtis, Sam Yakubek, Ben Kuboff, Hailie Singer and sixth graders Lucas Dyke, Laura Hovorka and Sophie Agee. — Mary Ann Greier