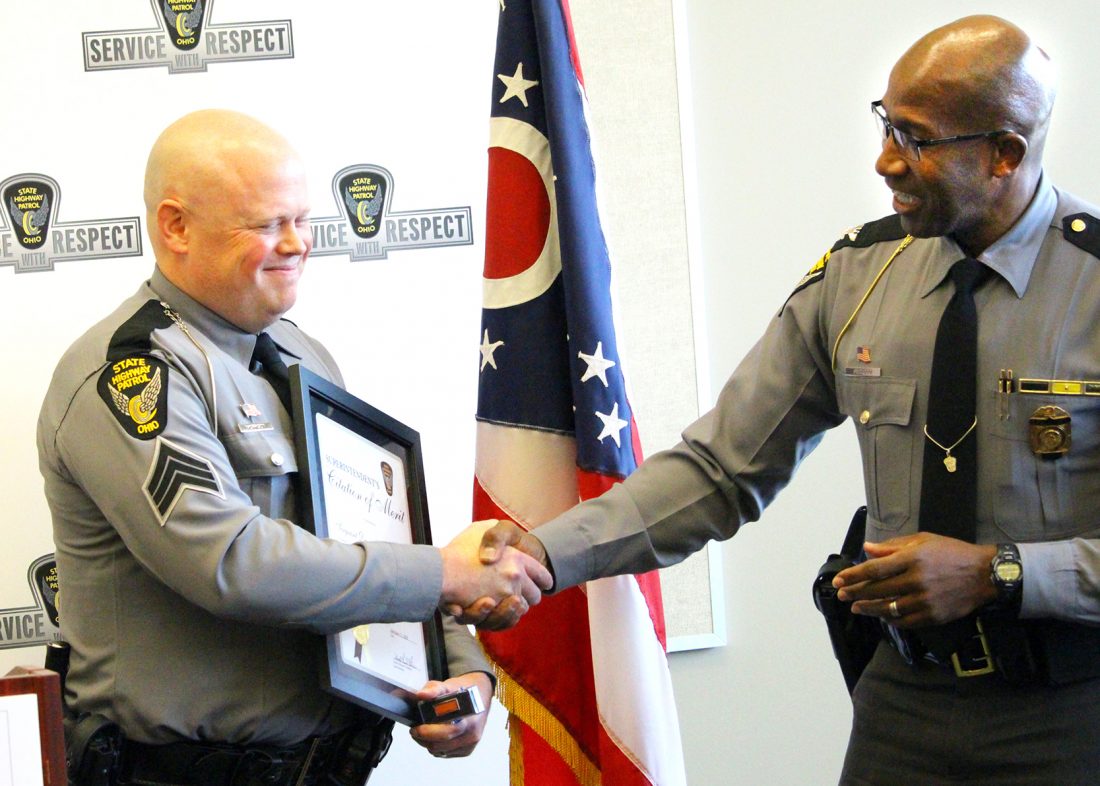 LISBON — When Ohio State Highway Patrol Sgt. Daniel Morrison was westbound on Interstate 80 on New Year’s Eve, he was off-duty. Traveling home from his uncle’s house in Fowler Township, Morrison was spending time with his wife Casey and his daughters Madelynn and Isabella.

While driving, Morrison looked up and spotted a man running on the interstate toward the center lane. Without hesitation, Morrison pulled over and asked Casey to call 911. She didn’t hesitate either, as she made the call and then began to flag oncoming traffic over at the same time. As Morrison exited the vehicle and approached the man, he was able to convince the man to step away from the center lane and toward the shoulder of the road.

“I told him that everything was going to be OK,” Morrison said. “He was yelling a lot at first, which turned into crying. He had recently lost some family members and was going through some tough times, so I just tried to help him.”

Morrison attempted to console the man, who was distraught due to medical and family issues. In an attempt to prevent the man from harming himself, Morrison took him into custody until additional law enforcement arrived. The man was then transported to a local hospital for both a physical and mental evaluation.

“There was no hesitation,” Morrison said. “I’m just used to working up on Interstate 80, and my experiences and training definitely kicked in. I just started to slow down immediately when I saw that I was able to do something.” 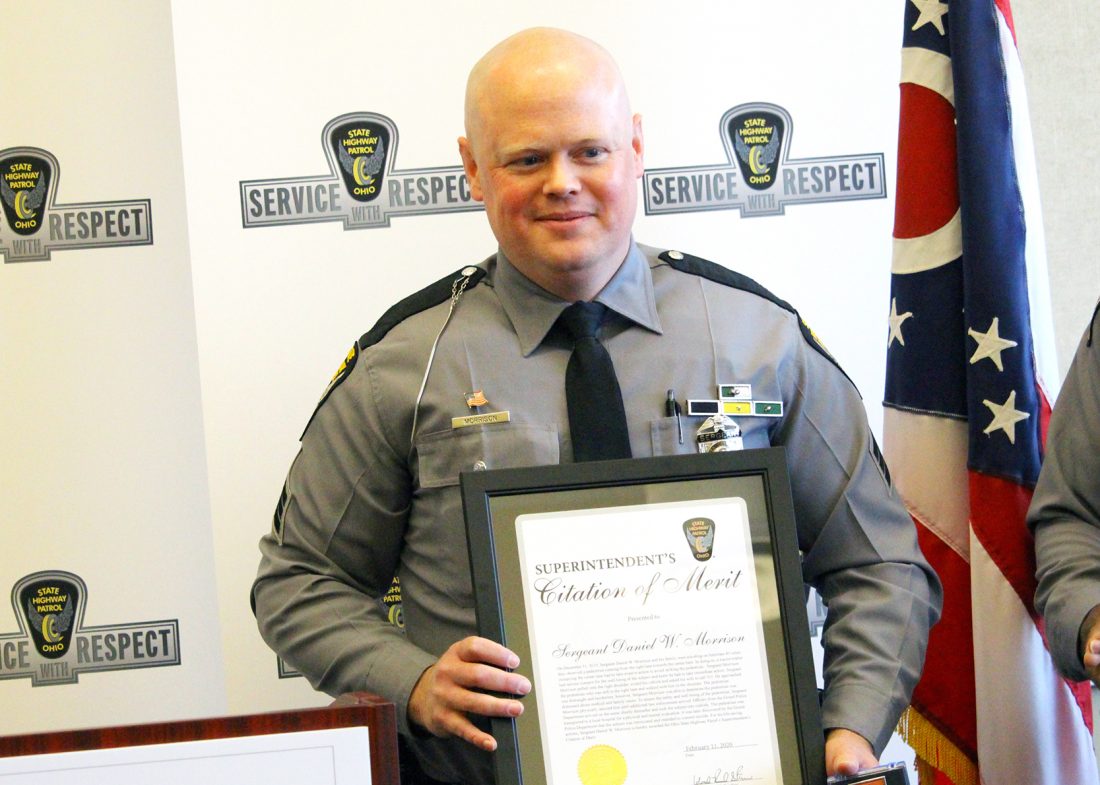 The Girard Police Department took over the incident and later determined that the man intended to commit suicide that day.

Morrison, a member of the 150th Academy Class, was awarded for his heroic actions during the Superintendent’s Citation of Merit Award presentation at the Lisbon patrol post Tuesday.

Patrol Superintendent Colonel Richard Fambro presented the award to Morrison for his courageous handling of the dangerous situation and exemplifying the patrol’s core values.

“It takes a selfless act,” Fambro said. “You go into the mode of being a trooper at that very moment, and you aren’t thinking about anything else. I don’t know that I would have done the same thing.”

Morrison earned his commission in April 2011, was promoted to sergeant in September 2017 and is currently assigned to the Lisbon post. 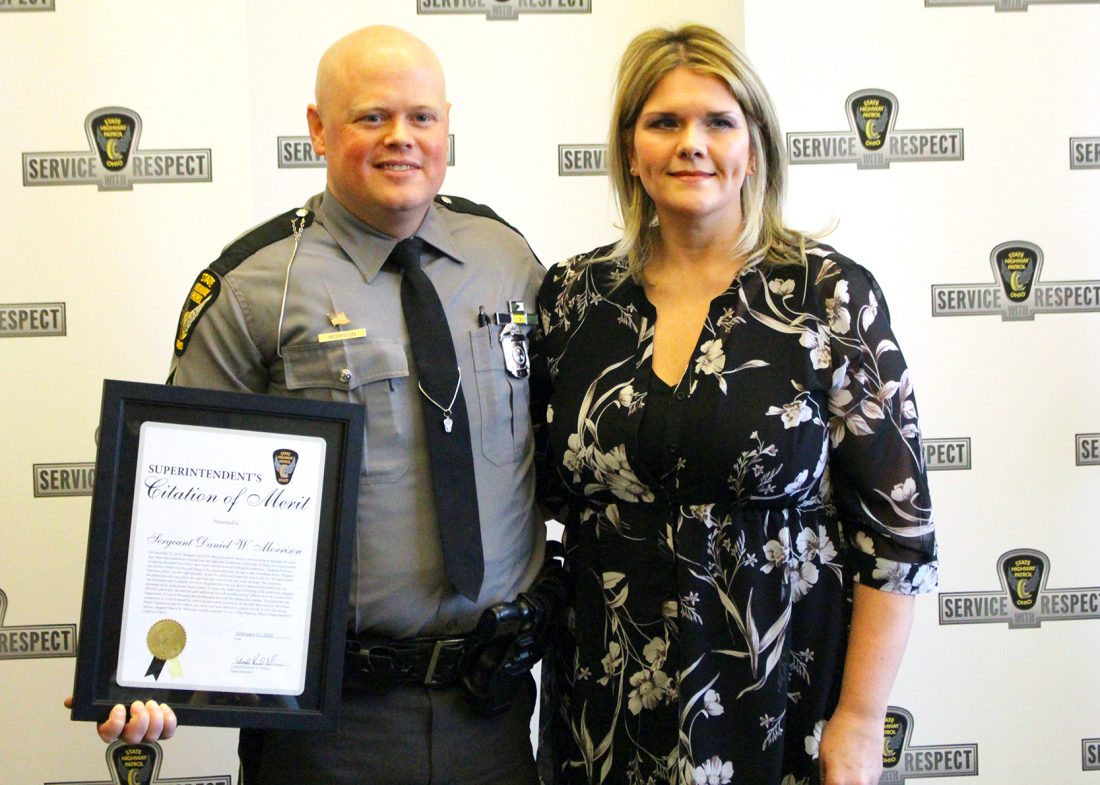 “We live in a world today where people don’t have time for that, much less doing it for total strangers and not knowing what the outcome is going to be,” Fambro said. “We always talk about putting service above self, and that is certainly what he did that day. This is just another example of the Patrol being a family affair.”

While Morrison was very gracious to receive the award, his humble attitude led him to believe that he was just doing his duty.

“It’s a great honor to get this award, but I never expected it. I never hesitated and just did what I had to do in order to safe somebody from harming himself,” Morrison said.

LISBON — An East Liverpool man accused of a shooting incident on Green Lane in the fall of 2018 appeared for a ...

LISBON — Two of those housed at the currently filled-to-capacity FCI Elkton federal prison facility have tested ...

COLUMBUS — Gov. Mike DeWine on Monday extended the Ohio schools’ shutdown order until May 1 to help slow the ...

Negley Masons to serve fish The Negley Masonic Lodge, 50873 Richardson Ave., will be having a fish fry from 4-7 ...