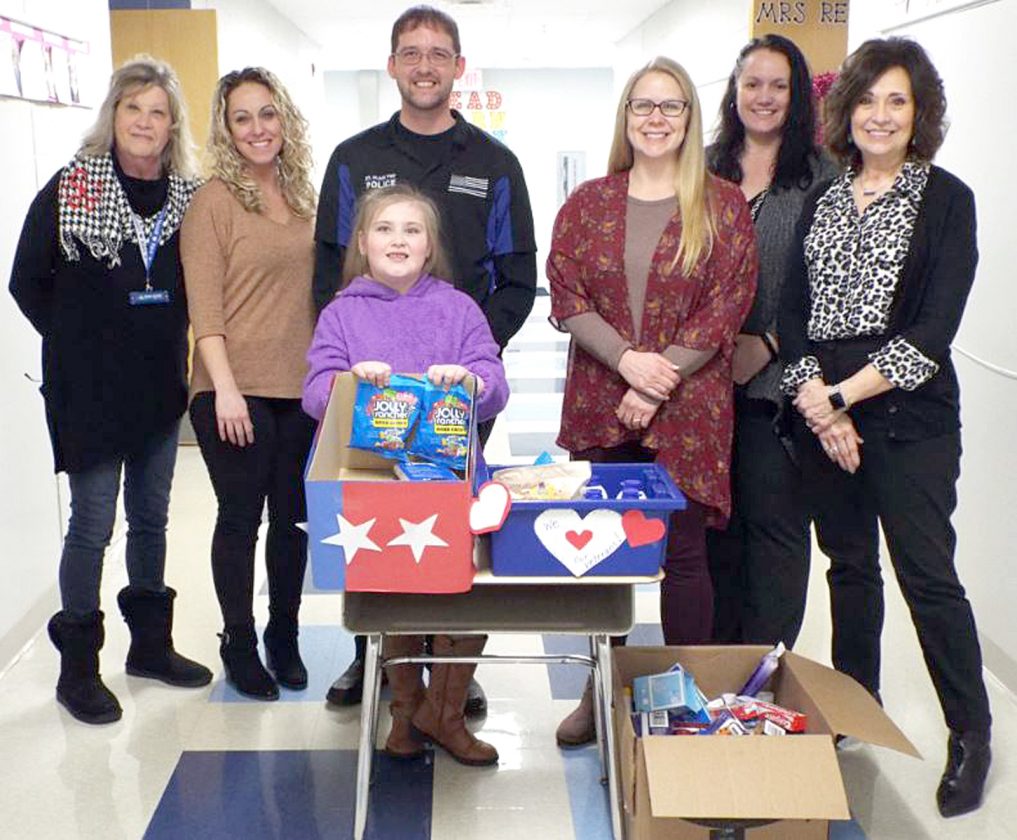 Morning Journal/Stephanie Ujhelyi Members of the LaCroft Elementary School are collecting items to be included in care packages for members of the military after one of their own finds himself stationed overseas. The second grade hopes to help the soldiers, like the son of PAX partner Melissa Mellon, make life tolerable while they find themselves serving on their behalf. Front row, Aleigha Potts holds her classroom’s collection box with Cathy Reed (from left), Breezy Pugliano, Herman Potts, Mellon, Jennifer Davidson and Tami Drago.

EAST LIVERPOOL — Her assignment is to educate youngsters about good behavior and community; but Melissa Mellon witnessed some of that herself recently after second graders at LaCroft Elementary School decided to show gratitude to her son, who is deployed in the military overseas and the other soldiers that serve.

Mellon is the PAX partner assigned to the school by the Columbiana County Educational Service Center, and the second-grade that she serves mobilized to show their support.

Some of the school’s faculty, including Tami Drago, Breezy Pugliano, Cathy Reed, Jennifer Davidson and Loni Goodballet Rose, decided to show their support to Mellon’s son and show their gratitude, so they teamed up to have the four second-grade classes collect items to be sent in care packages to him and his comrades.

Teachers sent a letter home with all their second-grade students, including Aleigha Potts, who is a student in Tami Drago’s class.

Aleigha’s father Herman Potts shared the grade’s project on a social media post, and “everyone else just jumped on board.”

Pugliano explained that with all the bad in news, teachers thought it gave the community a chance to do something good. “Everyone knows someone in the military,” she added.

This is Mellon’s third year assigned to LaCroft. She explains the PAX program this way. “(It) is an evidence-based program that is being used at the East Liverpool elementary schools that teaches good behavior within the classroom and school setting. The program teaches students how to be leaders within their environments, at school, home and in the community. The program is proven to decrease substance use later n life and mental health disorders while increasing self regulation,” she explained.

Timing did turn out to be everything, as February was Kindness Month.

Toiletries include body wash, hand sanitizer, dental floss, Vicks VaporRub, shampoo, face wash, baby wipes and toothpaste and toothbrushes. Deodorant also is much welcomed; however, they ask that one doesn’t send aerosol or products like chocolate that would melt.

In addition to any of the four second-grade locations, which all have decorated boxes, drop-off sites include the St. Clair Township Police Department, where Potts works; Affordable Appliance; Bermuda Tan; Keystone Printing; Calcutta Towing and Tri-State Ford. Wellsville American Legion Post 70 also has a box to collect the goods, which all with be sent out during the last week of February.

An anonymous individual also donated 150 decks of playing cards for inclusion in the care packages.

An additional box will be setup in the LaCroft office to collect additional contributions from the other classes.

The class that collects the most items will be given an ice cream party, according to the letter.

Teachers ask that donations be delivered to the dropoff sites by 3 pm. Feb. 26, which is also Ash Wednesday.

Mellon, who expects the packages to arrive to the soldiers in two weeks after sent, said that she is incredibly humbled by the community’s effort. “It is encouraging to see these educators teach the meaning of service. That is the kind of thing we are here to do,” she concluded.

St. Clair Township police officers will be collecting donated items for the drive from 2 to 3 p.m. Saturday, Feb. 22 at Tim Horton’s.

LISBON — An East Liverpool man accused of a shooting incident on Green Lane in the fall of 2018 appeared for a ...

LISBON — Two of those housed at the currently filled-to-capacity FCI Elkton federal prison facility have tested ...

COLUMBUS — Gov. Mike DeWine on Monday extended the Ohio schools’ shutdown order until May 1 to help slow the ...

Negley Masons to serve fish The Negley Masonic Lodge, 50873 Richardson Ave., will be having a fish fry from 4-7 ...