The new first family of Liverpool 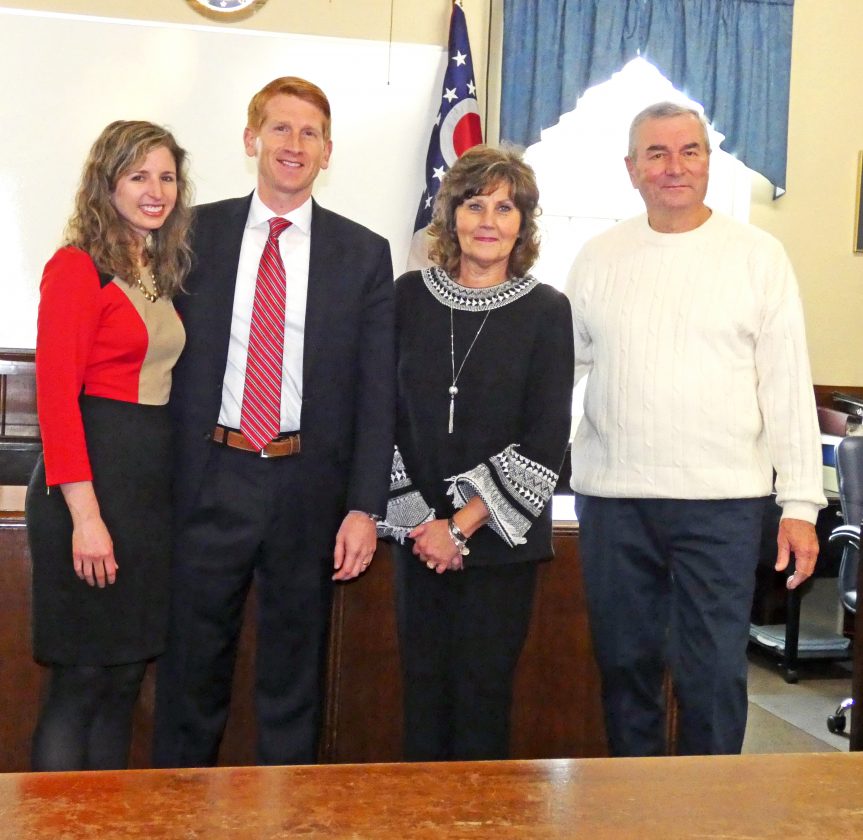 EAST LIVERPOOL — Newly elected city mayor Greg Bricker has high hopes for his hometown, but he admits that the task will take community support. After running as a first-time political candidate as a write-in, voters overwhelmingly approved of his message, choosing him over two seasoned veterans, including the incumbent.

Hours before he was scheduled to be sworn in by Columbiana County Common Pleas Court Judge Megan Bickerton Thursday afternoon, he admitted that he was excited for January 1. “There are a lot of moving parts right now. I am trying to hit the ground running as much as possible,” he explained.

Bricker has a yeoman’s task ahead of him. Earlier this week, he was in attendance at a meeting for city council’s Finance Committee, where members brainstormed about ways to make up the money that they expect to lose as a result of the voters’ prohibition on the traffic cameras in November.

And, yes, he acknowledged that a property tax was mentioned but so were many other suggestions, all which may be hashed out during a special council meeting later that night.

However, he expects that he won’t be tackling the job on his own. Although he is still mum regarding his safety-service director choice, Bricker did reveal that the person will join him at the second regular council meeting in January, which is the first after current officeholder Brian Allen’s duties will cease.

He did reveal a few little hints about his candidate.

— His choice possesses both the experience and background that would fit the mold as a safety-service director,.

— Infrastructure is still at the forefront of Bricker’s agenda, and his choice would have experience for not only dealing with roads but applying for grants.

— And finally, his choice does have an engineering background.

Bricker added that both he and his choice have been discussing choices for a new deputy safety-service director to see who might fill that role for his administration. “We won’t be able to patch every pothole in the next four years, but we will develop an annual road repair program,” he added.

The other two priorities continue to be economic development and housing, which he promised during his campaign; however, he acknowledges that a lack of money does limit his options right now.

For example, he speaks of the condition of the housing throughout the city and seeks to correct that. Although the current city housing inspector is doing a tremendous job, he is just one man. “We don’t have a housing problem in East Liverpool, we have a housing crisis,” Bricker said, adding that he believes city officials need a better program in place to get those problem houses into the Columbiana County land bank.

While he believes that hiring additional inspector bodies – one for each ward – would help, Bricker also knows that would be unrealistic, considering the available money.

That is why he agrees that one of the major hurdles would be “finding the money somewhere.”

He also wants to assure city employees, who may be a little unsure of their employment future, that they don’t need to be. Although he takes the helm in 2020, he reiterates that the only current change will be at safety-service director. “It would be crazy for me to go in and change things with out knowing if someone is good at his job or not,” Bricker added.

Next week, Bricker will be meeting with some Columbiana County officials next week and hopefully attending a luncheon with Ohio Gov. Mike DeWine. Both moves are crucial to securing that much needed change for East Liverpool.

“We need to open the state’s eyes that a lot of towns are just like East Liverpool and struggling. I hope state officials can find something in the budget to help us,” he said. “They are all here to help, and it reflects well on them if we can make East Liverpool a better place to live.”

He also reminds the community that to make that renaissance of sorts happen, community support is much needed. “We cannot do this alone,” Bricker concluded. “I have a lot of ideas and plans, which I will reveal later.”

LISBON — After working for months to create a unified plan to reopen the schools after coronavirus closed them on ...

NEW WATERFORD — With plans in hand to restart the school year, the Crestview Local School District is asking ...

SALEM — The funding gap is getting smaller between last year’s income tax receipts and this year’s receipts ...

The Columbiana County Park District announced that the Greenway trailhead at state Rout 164 in Lisbon will be ...