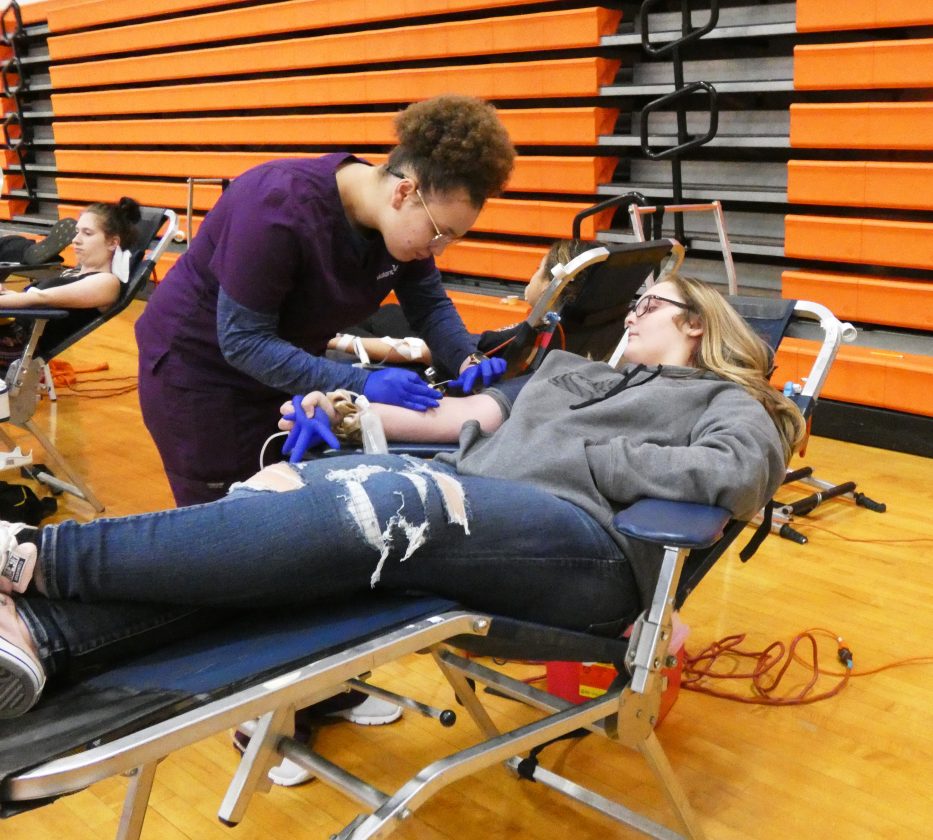 Morning Journal/Julie Riedel Wellsville senior Skyler Hamilton gives blood during the high school’s blood drive on Monday. Vitalant phlebotomist technician Jordan Russell explained the process as she prepared Hamilton. Hamilton said she had given blood before. The drive was sponsored by the Y Teen club.

WELLSVILLE — The district has about one more collection year left on the bond used to pay for the high school, treasurer Bob Barrett told the Wellsville school board Monday.

“The district has been good stewards of their funds, in paying off the building in time, so congratulations to the community,” said Barrett.

Superintendent Richard Bereschik reported they have been paying on the bond for approximately 20 years.

In other business, the board:

— Board member Gary Althiser announced the district received a $717 6B Restoration Grant and a $3,144 Ohio School Safety Grant.

— Board member Tom Brophey announced they had 75 students on the honor roll this past term.

— Building and Grounds Supervisor Joe Traina announced with the exception of landscaping items the stadium is mostly done. He added there is still cement work needing done and that there are a few items the architects noticed needing to be adjusted at the final walk through last week.

— Board member Rick Salsberry reported the Columbiana County Career and Technical Center will be approving its five-year forecast and will be hiring two new adult education instructors at its next meeting.

— Bereschik complemented those involved with the Veteran’s Day assembly, he described it as one of the nicest things the district does.

— Board member Ed Bauer reported he regretfully could not attend the Veterans Day assembly, but he heard it was very nice and he thanked everyone involved.

— Bereschik announced the school system is looking for ways to update it’s safety measures. He reporting the 51 cameras at Daw Elementary, 46 cameras at the high school, 31 cameras at Garfield and cameras at the practice areas will be on line completely. He also said they are looking into adding vaping detecting devices which are offered through the safety service company the district has worked with before.

— Althiser mentioned a Facebook post made by a waitress at the Steubenville Texas Roadhouse this past weekend about how polite and respectful nine Wellsville students were. The group went out to eat after the Sadie Hawkins dance. Althiser said “It was great to see that, publicly acknowledging our kids for being the kids that we all know that they are, it’s just nice to hear that from the outside.”