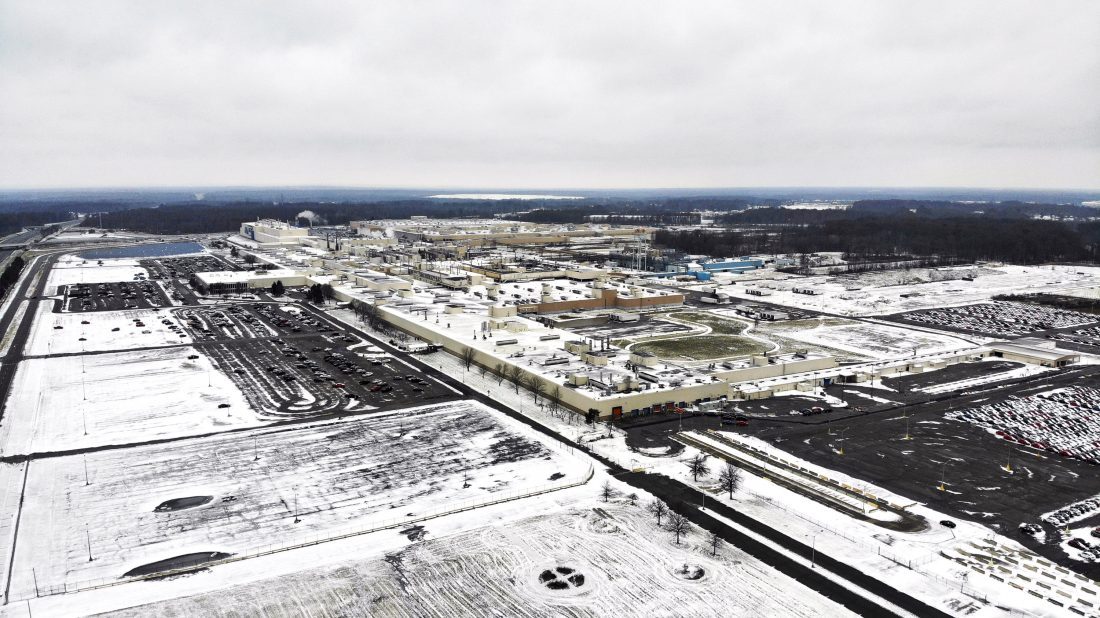 AP/John Minchillo In this Nov. 28, 2018, file photo snow covers the perimeter of the General Motors’ Lordstown plant in Lordstown.

Most details of the sale announced Thursday were unavailable. The sale, however, does include the building, grounds and production equipment such as robots and conveyors.

Lordstown Motors CEO Steve Burns said the plan is to start production of the Endurance, a full-size commercial fleet pickup truck, in late 2020.

“We are committed to the people of Lordstown, we will locate our headquarters in the Lordstown plant and will plan to build the Endurance pickup truck utilizing experienced workers who helped produce millions of vehicles in this very same plant,” Burns said.

Burns has said he hopes to bring battery cell production to the 6.2 million-square-foot plant. The facility would employ about 400 people to start.

GM idled the plant March 6, the first of three facilities closed as it shifts production toward trucks, SUVs and electric vehicles. The plant most recently produced the Chevrolet Cruze sedan — once one of Chevrolet’s best selling vehicles — but has produced multiple vehicles in its five plus decades, including the Chevrolet Cobalt, Cavalier, Impala, Vega and a van. It also produced several Pontiac vehicles.

There was hope by many that recent contract talks between the United Auto Workers and GM would yield a new vehicle production line for the plant, but those hopes were killed when on Oct. 16 the sides announced a tentative contract agreement that didn’t have a new line, but allowed GM to proceed with formally shuttering the plant.

The announcement that GM was in talks to sell the plant to an unnamed buyer affiliated with Cincinnati-based Workhorse Group Inc. — an electric delivery truck manufacturer founded by Burns — came in May. It was later revealed that Lordstown Motor was the potential buyer.

Workhorse would own about a 10 percent stake in Lordstown Motors, which would license from Workhorse its technology to build the pickup.

The agreement with Workhorse also provides the opportunity to transfer 6,000 existing preorders received by Workhorse for its W-15 prototype to Lordstown Motors.

Workhorse is also on the short list of four companies seeking to land a multibillion contract with the U.S. Postal Service for electric delivery vans. Landing that might translate into the vans being produced in Lordstown, Burns has said.

In a statement posted to GM’s website, the automaker said it is “committed to future investment and job growth in Ohio” and believes Lordstown Motors’ plan to launch the battery-powered Endurance pickup truck “has the potential to create a significant number of jobs and help the Lordstown area grow into a manufacturing hub for electrification.”

Reaction to the news was swift.

“I’m not surprised,” said Tim O’Hara, president of UAW Local 1112. “I think contracts have been drawn up for months and they were just waiting on the results of the contract negotiations between GM and the International UAW.”

“Nothing is going to replace the 5,000 jobs associated with the GM complex and thousands of spinoff jobs, but any jobs for the Valley are a good thing. And we hope is these jobs do happen …. they are union jobs and they are represented by Local 1112,” O’Hara said.

Burns has said he wants to employ UAW members at the facility. O’Hara said he hasn’t had discussions regarding that.

“Those discussions will take place in Detroit (where UAW is headquartered) or at the regional level of the UAW and then of course, if it comes to pass, we’ll probably be the local that will represent them,” O’Hara said. “But then again, we don’t know the timeline. Is this something that is going to happen in the next 12 months of two years? We don’t know those details yet.”

GM’s presence in the region may not be gone forever. The company has said it plans to bring an electric battery production plant to Lordstown or nearby the village.

Local and state officials said the news is encouraging for the Valley’s future.

State Rep. Michael O’Brien said the sale presents an opportunity to “reinvent ourselves,” while state Sen. Sean O’Brien said the project offers a great chance “for research and development, ancillary business development and continued revitalization in the Valley.”

“Instead of steel and automobile manufacturing, we can be the electric vehicle center and hopefully we can attract suppliers in the market around that plant,” said Michael O’Brien, D-Warren.

Lordstown Motors and other planned investments “are positioning northeast Ohio as a hub for technology, which completely reshapes the future trajectory of the whole Mahoning Valley,” said Jim Tressel, president of Youngstown State University.