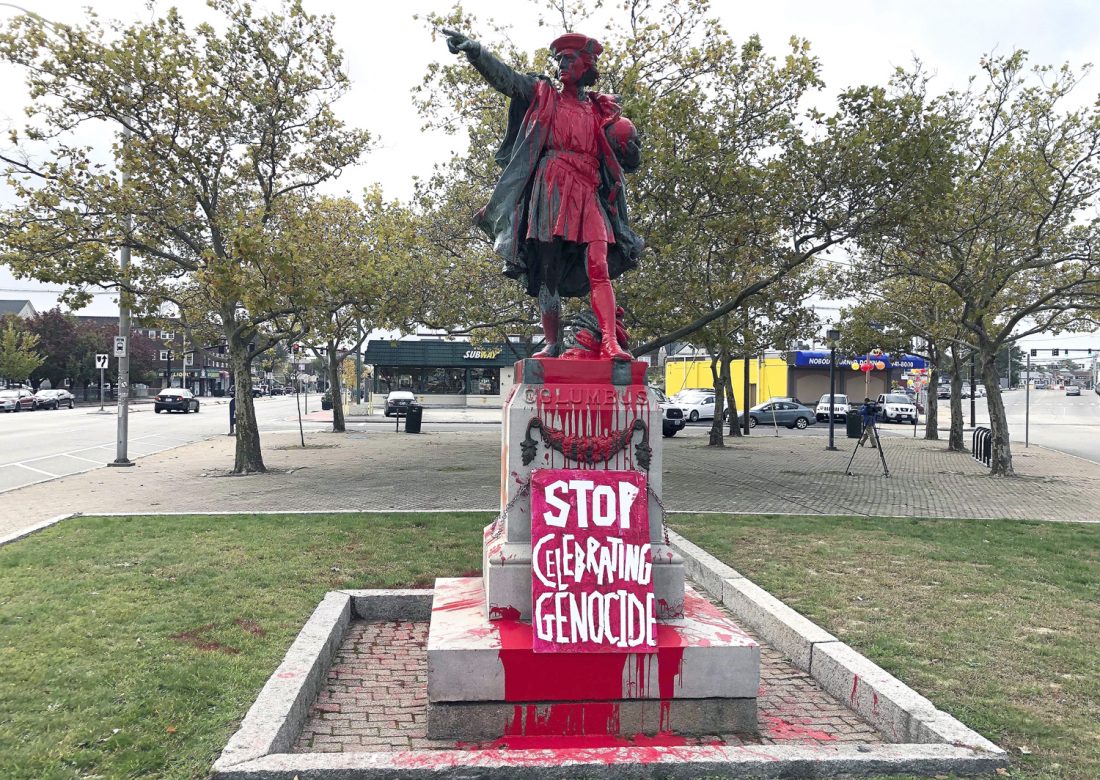 A sign reading "stop celebrating genocide" sits at the base of a statue of Christopher Columbus on Monday, Oct. 14, 2019, in Providence, R.I., after it was vandalized with red paint on the day named to honor him as one of the first Europeans to reach the New World. The statue has been the target of vandals on Columbus Day in the past. (AP Photo/Michelle R. Smith)

PROVIDENCE, R.I. — Several Christopher Columbus statues were vandalized with red paint and messages against the 15th century Italian navigator Monday when the holiday named for one of the first Europeans to reach the Americas was celebrated.

A statue in Providence, Rhode Island, was splashed from head to toe Monday with red paint, and a sign reading “Stop celebrating genocide” was leaned against the pedestal.

The word “genocide” was written in orange paint on the rear of the pedestal.

The statue has been the target on Columbus Day in the past.

Crews were called in to clean off the paint, Chula Vista police Capt. Vern Sallee said.

The statue was similarly vandalized in February.

In San Francisco, a Columbus statue at the foot of Coit Tower, in the city’s North Beach neighborhood, was vandalized sometime Saturday night or Sunday morning. Someone poured red paint over it and drew anarchy symbols and messages on the concrete base that read “Destroy all monuments of genocide” and “Kill all colonizers.”

The New World explorer has become a polarizing figure.

Native American advocates have pressed states to change Columbus Day to Indigenous Peoples Day over concerns that Columbus spurred centuries of genocide against indigenous populations in the Americas.

A handful of states celebrated their first Indigenous Peoples Day on Monday as part of a trend to move away from a day honoring Christopher Columbus.

New Mexico, Vermont and Maine are among the latest to pass measures doing away with Columbus Day celebrations in deference to Native Americans.

In all, around 10 states observe some version of Indigenous Peoples Day in October, along with more than 100 U.S. cities.

Washington, D.C., is celebrating Indigenous Peoples Day this year under a temporary measure.