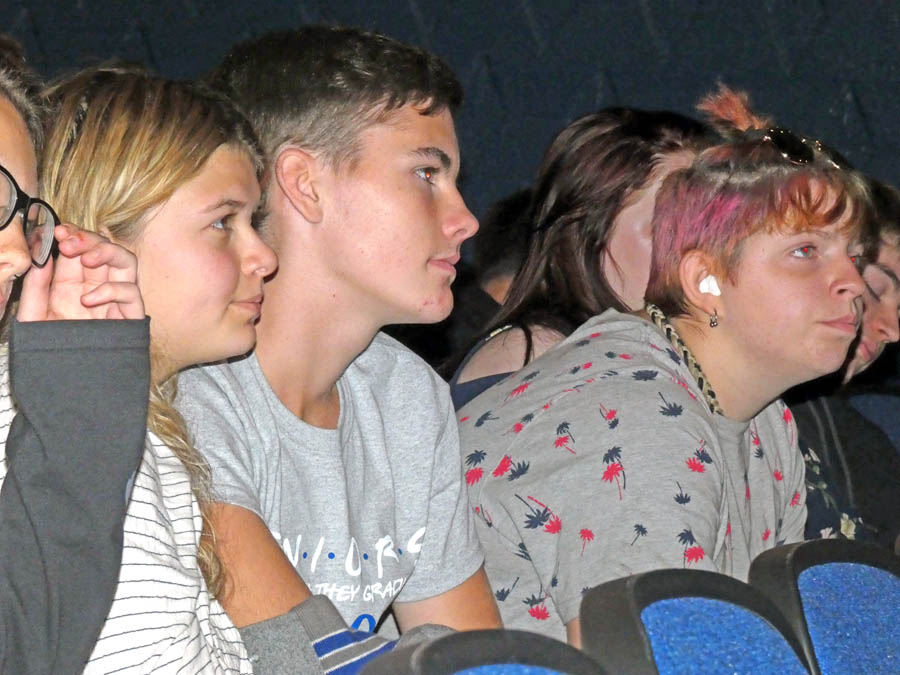 EAST LIVERPOOL — One truth emerged during Tuesday afternoon’s mayoral debate, as East Liverpool Mayor Ryan Stovall pointed out. He, Brian Kerr and Gregory Bricker have different strategies of how they want to move the city ahead. They faced off Tuesday afternoon for a 90-minute debate at East Liverpool High School less than a month away from the November general election.

Bricker, the race’s write-in candidate, accused the administration’s strategy of depleting the city’s tax base through its demolition efforts and leaving the infrastructure to fade away from neglect.

Kerr, an at-large councilman, agreed about the city’s crumbling infrastructure and how the city’s deplorable appearance has made it difficult to locate any business there and have it succeed. He believes that cleanup will be a key step to economic development opportunities.

Stovall, who is just wrapping up his first term as East Liverpool mayor, also was criticized for him not being available for enough appearances by both his opponents. In Bricker’s words, “The mayor sets the pace for the city,” while Kerr believes that he isn’t visible enough for community events.

The mayor, however, admitted that may be true; however, his family comes first, and he was unapologetic for that: “I miss things for my family. It comes first, and that is what I will continue to do.” He also disputed assertions from his opponents who allege he fails to frequent downtown businesses and is out of touch with owners. Stovall, who was East Liverpool’s first community policing officer while on the city’s force, said engaging “Mom and Pop” businesses that make downtown home is crucial to their economic growth.

He also touted the city’s tourism efforts, like the Ceramic City Jazz, Blues and BBQ Festival that attracted 10,000 people to East Liverpool and also encouraged youth to volunteer.

Students also inquired of candidates of how they hope to make East Liverpool a safer place. Stovall touted that since instituting the traffic cameras during his tenure as mayor, the city has been able to hire an additional six officers. He urged the importance of continuing the fight against drug dealers and taking neighborhoods back.

Kerr is not a fan of the ELPD’s vacationing committee. He acknowledged the police department is currently divided and pointed out that the traffic cameras are not the officers’ fault.

Bricker attributed the city’s drug problem to the lack of job opportunities.

Infrastructure was a major focus of the debate with Bricker criticizing the Stovall administration’s “wasteful spending” and lack of initiative to pursue grants.

Both Kerr and Stovall acknowledge the city’s roads are a major complaint. Kerr unveiled a three-year plan centering around a Durapatcher emulsion unit and chip and seal, while Stovall discussed how the decline in the street department staff from 35 to five was a major reason holding back officials from doing much. He also acknowledged Bricker’s comments, pointing out most state grants require a match and they lack those funds.

Discussions turned a little more heated on the topic of the city’s safety forces, while Kerr criticized that city’s current model as being “traffic camera dependent” and asserting that money should have gone to infrastructure.

Stovall alleged that currently city officials have an outstanding $3 million worth of speeding tickets from the traffic camera unpaid and uncollected, triggering an exchange between the two men regarding the facts.

Bricker did agree that the cameras provide an “unstable” funding model.

For the last question of the event, each candidate was asked what his first priority would be if elected.

Bricker believes that an inventory of available space in downtown plus a checklist needs to be compiled to assist business owners with relocation.

In addition to firing the current safety-service director, Kerr also said that he would like to see East Liverpool to do more public events – especially utilizing the East End of town.

East Liverpool Municipal Court Judge Melissa Byers-Emmerling also was on hand for the event, sans her opponent Dominic Frank, and discussed how she wants to continue as the district’s judge because of her “ability to change lives and make a difference.”

The debate was organized by the East Liverpool High School speech and debate team.