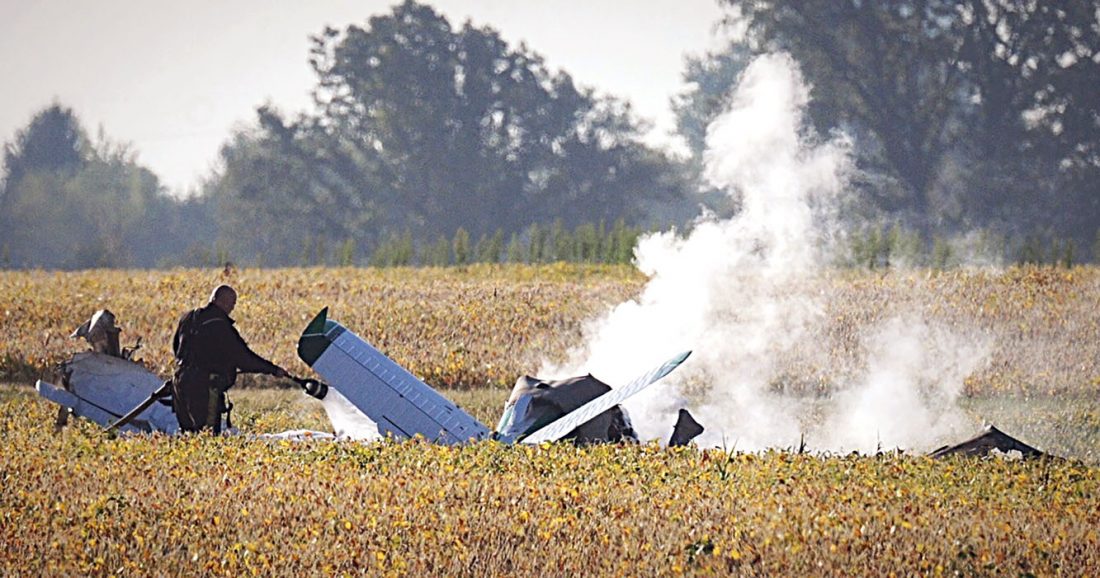 LONDON — Asingle-engine plane attempting to land at a county airport in Ohio has crashed and the pilot has died. Donald Apple, 89, of Piqua, was pronounced dead at the crash in a field just west of the Madison County Airport. A patrol release says the single-engine Beechcraft crashed around 7:30 a.m. Wednesday as it was approaching a landing strip at the airport near London, which is roughly 30 miles southwest of Columbus. The airport was closed to flights Wednesday morning while the investigation continued. Airport officials said it was expected to reopen later in the day.

CHILLICOTHE — A group is offering a $10,000 reward for information leading to the arrest and conviction of anyone involved in the death of a woman hit by a falling piece of tree at an Ohio state park. Forty-four-year-old Victoria Schafer was struck Sept. 2 near Old Man’s Cave at Hocking Hills State Park and died at the scene. Authorities initially believed the part of the tree that hit the Chillicothe woman fell on its own but the Ohio Department of Natural Resources later said it had evidence indicating there may have been foul play. The department says it’s now investigating the death as a suspected homicide. Southern Ohio Crime Stoppers, the group offering the reward, says anyone with relevant information should contact local law enforcement.

COLUMBUS — The interim police chief here is recommending two officers from the department’s now-disbanded vice unit be fired for their roles in an undercover strip club operation last year that resulted in the arrest of porn actress Stormy Daniels. An internal investigation focused on allegations that Columbus officers who supported President Donald Trump conspired to retaliate against Daniels over her claims she had sex with Trump before he became president. Chief Tom Quinlan on Wednesday recommended the firing of two arresting officers, suspensions for a lieutenant and sergeant, and a written reprimand for a commander. The city’s safety director has the final say. The police union called the recommended discipline excessive. Charges were dropped against Daniels hours after her July 2018 arrest.

TOLEDO — Toledo’s last abortion clinic is administering only medication abortions as it undergoes a management change. Capital Care Network of Toledo surrendered its license for performing surgical abortions to the Ohio Department of Health last week. The head of Greater Toledo Right to Life said Wednesday that Toledo’s “last surgical abortion chamber is closed.” NARAL Pro-Choice Ohio countered in a tweet that the halt in surgical abortions is temporary. Calls last February by feminist icon and Toledo native Gloria Steinem helped the clinic secure a patient-transfer agreement with a local hospital system, a requirement for surgical abortions. A clinic spokeswoman said Wednesday the agreement is no longer valid. She wouldn’t say whether the clinic will reapply.

TOLEDO — A former state trooper whose 4-year-old son fatally shot himself with an unsecured handgun has been found guilty of a misdemeanor charge. Thirty-two-year-old Fu Sun entered an Alford plea Tuesday to a charge of negligent homicide in the death of his son, Evan, in May. An Alford plea is not an admission of guilt but acknowledges there’s enough evidence for a conviction. A felony endangering children charge was dismissed. Sun graduated from the patrol training academy in April. He resigned in mid-June. Defense attorney Lorin Zaner called the case a sad situation that’s been resolved with a fair resolution. Sentencing is scheduled for Nov. 5.

3,600 reach out after shooting

COLUMBUS — More than 3,600 people have written letters, emails and made phone calls to Ohio Gov. Mike DeWine in the month following the deadly mass shooting in Dayton. The Columbus Dispatch reports many of those contacting DeWine have personal connections to the Aug. 4 shooting in which the gunman killed nine people, including his sister and left more than two dozen injured. DeWine’s office says nearly 2,600 of 3,098 emails encouraged new gun restrictions. The office categorized more than 500 other emails as having “pro-Second Amendment” sentiments. DeWine spokesman Dan Tierney says the governor doesn’t read the notes, but staff members do. Two days after the shooting, the Republican governor outlined a plan he already had been developing. It includes background checks and increased mental health aid, among other proposals.