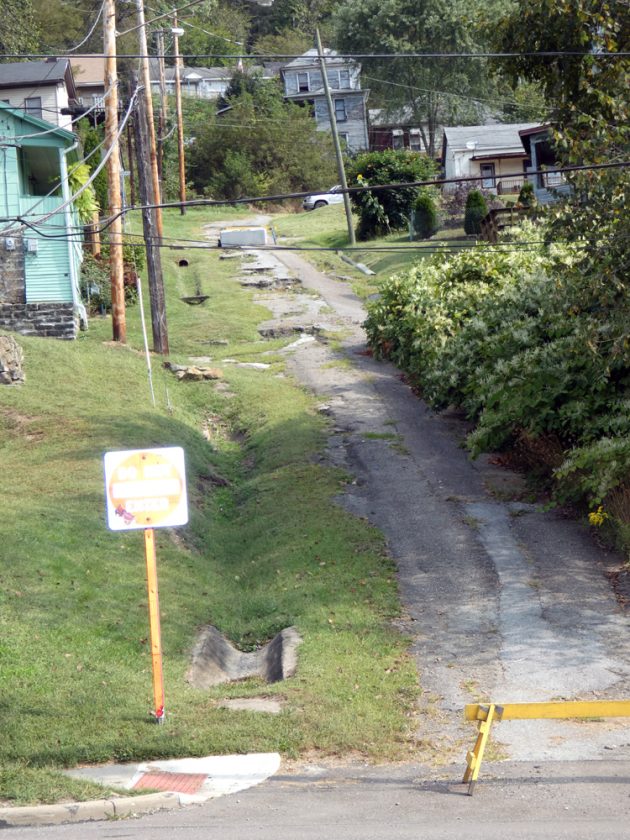 Morning Journal/Stephanie Ujhelyi Division Street in East Liverpool is scheduled to be repaired.

EAST LIVERPOOL — More than $120,000 in public assistance money are destined for the city after storms wreaked havoc in May.

City Safety-Service Director Brian Allen said the bulk of the funds will go to Division Street, riddled with deep washouts and currently closed. He expects $60,000 to $70,000 to be spent on the one-way street located across from the Dairy Queen on the west end of town.

The Federal Emergency Management Agency made the funds available for storm-related response and recovery efforts, including debris removal and emergency protective measures. However, the bulk of this area suffered damaged to its aging infrastructure.

Columbiana County had reported $1.65 million in road damage; however, the more than $1 million of that was to repair a slip on Midland-Fredericktown Road in St. Clair Township. Another $261,000 also was destined to repair a slip on Calcutta-Smith Ferry Road.

Although East Liverpool earlier put its damage losses at $191,000, Crowl said that the experts now have to weigh in.

Allen outlined the FEMA news to council this week, as some expressed that it might be better to earmark the Division Street funds elsewhere and just close the road all together. However, the safety-service director explained that no longer was an answer, so they will be fixing the road.

“Closing any street is an easy answer but not for the area affected property owners,” Allen said, adding that road access is an important part of maintaining property values and economic development.

For example, East Liverpool needs to open McKee Street and give residents of the area a travelable street, he explained.

Neither Crowl nor Allen could provide a work timeline, as it is all up to FEMA.

Crowl does acknowledge that it is another example of the positive things that can occur when multiple city departments work together.

Allen said the work on St. Clair Avenue, Daisy Alley and Riverside Park have been completed; however, Division Street continues to cause him some pause. “We will have difficulty finding a contractor to tackle that because of the slope,” he concludes.