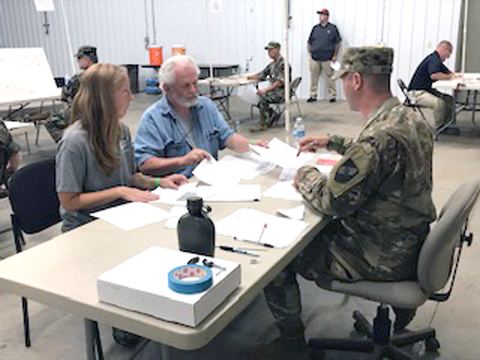 Submitted photo Shannon Rambo and Allen Cottrill are interviewed by Specialist Charl Bosman of the Ohio Military Reserve at the Center Township garage as part of a statewide emergency preparedness drill. The garage served as a volunteer reception center to process anyone who would show up wanting to volunteer during an emergency. Rambo and Cottrill were among local residents who played the role of local volunteers.

LISBON — The Center Township garage was used Tuesday as part of a statewide drill to test emergency preparedness in the event of a cyberattack that knocked out power and communications.

Members of the Ohio Military Reserve opened a volunteer reception center in the garage as part of the drill. This was done in cooperation with the Columbiana County Emergency Management Agency, which volunteered to be one of the county EMAs to participate in the drill.

The purpose of opening such a center is for citizens who might want to volunteer during an emergency. The volunteers would be interviewed and evaluated at the center to determine how best to be deployed, depending on their particular skills.

Lt. Ted Berry of the Ohio Military Reserve said their role was to go through the motions of locating and opening a center and then having their staff interview volunteers, who in this instance were played by members of the Community Emergency Response Team, a volunteer group that assists the EMA.

Part of the vetting process is to verify the credentials of volunteers. “If someone says they’re a doctor or a nurse, we’re going to check that out … to make sure the person is legit,” Berry said.

The Ohio Military Reserve is an all-volunteer component of the Ohio National Guard. Both are under the command of the Ohio Adjutant General, who is appointed by the governor and a member of the governor’s cabinet.

Had this been an actual cyberattack that knocked out power and disrupted communications, EMA Director Peggy Clark said she would have activated the Red Cross, the county health department and their volunteer group of amateur radio operators. With the power plants supposedly offline due to the mock cyberattack, the county would need to open a shelter for residents seeking assistance or in need of a place to keep cool.

The statewide drill is scheduled to go on all week, with different parts of the drill tested in other participating counties as the week progresses. The county’s participation was only for one day, and Berry was pleased with what he saw.

“What’s really impressive is what Peggy has done here. She’s got quite a network here,” he said, adding the county’s emergency response plan ranks among the top 10 percent among Ohio counties.