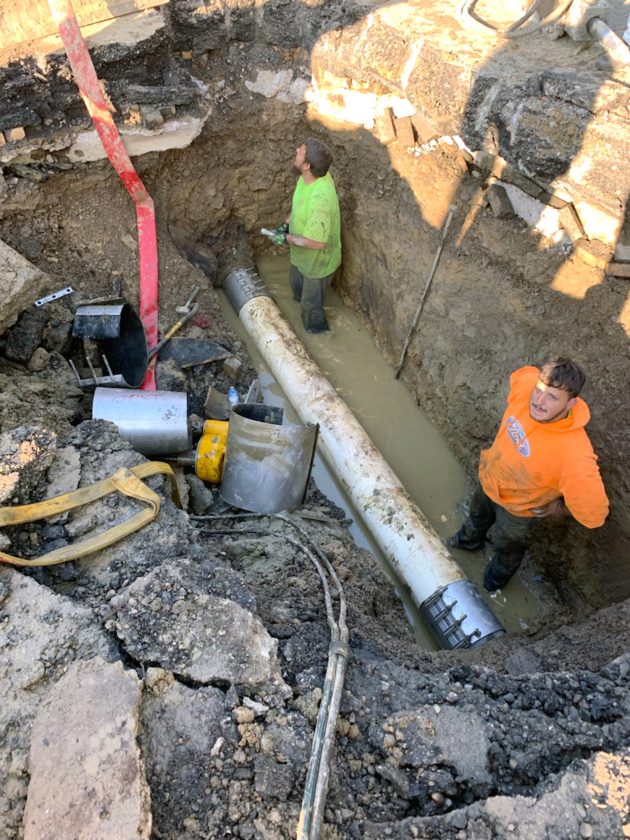 Submitted photo A city employee stands by a new 12-foot stretch of pipe is installed, replacing a ruptured section along Thompson Avenue that caused a major water service interruption in East Liverpool’s East End most of the day Friday. Officials had most customers once again getting water by noon Saturday, although the area was under a boil order.

EAST LIVERPOOL — Although residents of the East End live along the Ohio River, they were feeling a little parched when East Liverpool officials finally was able to restore water service Saturday morning after a 24-hour outage.

Mayor Ryan Stovall explained that a 12-inch main that fills the tank on Thompson Avenue suffered a 12-foot-long rupture. “The amount of water coming out of the ground was mindblowing…..Because the (water) system is a pressurized system, (city officials had) to restore service slowly, so no other breaks happen,” he added. “Once again I want to thank everyone for the patience and understanding during the major emergency water repair.”

Though some water customers advocated for credits on their bills, Stovall said that would not be happening:“Water is billed by gallons used, so no there will not be credits.”

The ruptured pipe in question is more than 100 years old and required the entire water department of seven employees to work overtime to make the repair.

He asks all East End water customers to boil their water, issuing the request through the Nixel notification system.

According to the Centers for Disease Control, water should be brought to a rolling boil for one minute before consumption to kill protozoa, bacteria and viruses.

While most residents are happy to see the return of their treated water supply, a few still took to social media to criticize officials for their lack of communication throughout the event.

Stovall still advocated that the work done by city employees under such adverse circumstances outstanding.

Fire personnel pumped out a resident’s basement that had filled with water as a result, he explained. Sewer provided maps and helped with the location of lines in the area of the break, while both police and street departments set up a traffic control zone to allow for safe movement of equipment and digging.

“All in all, I didn’t even mind sacrificing my shoes by night’s end, as I even jumped in some mud to help pull out one of the many pumps used last night. I am very proud of the men and women of our great city, and 24 hours later, water was restored to all,” he explained. “Watching a town once divided come together as a team is truly amazing.”

AURORA — A man who allegedly stole more than $700,000 from the VFW post here has been charged with aggravated ...

LISBON — A former East Liverpool man already in the county jail awaiting an upcoming hearing on other charges ...