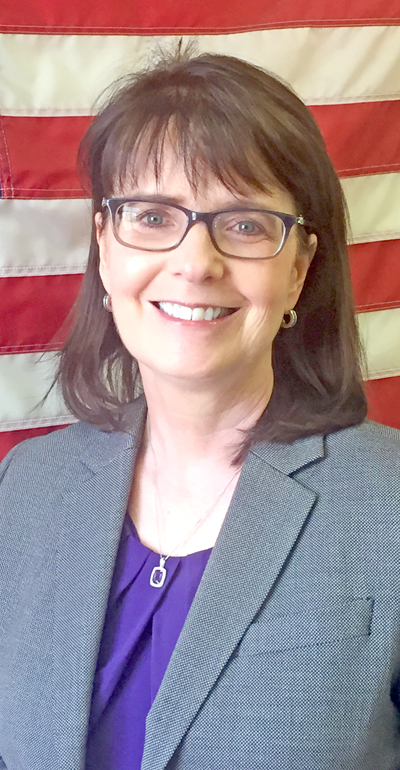 SALEM — Judi French said she’s just a kid from Sebring, a smalltown girl who’s grateful for her roots, but to the rest of Ohio, she’s Ohio Supreme Court Justice Judith French, a conservative jurist spreading the word about the court’s importance.

French was in town as guest speaker at the Salem Kiwanis Club meeting at the Salem Community Center. Her goal was to talk about the court, how cases are processed and why the court is so important. She wants people to know what the court does and who their judges are and said civic education is important to her.

She’s traveled to all 88 counties talking to students and groups about the court, but when in this area of Ohio, she said it’s nice to stay with her parents, Ed and Fran, who live in Winona, and to have dinner and visit with family. Her cousin is Austin French, who recently retired from the Salem Police Department.

So what’s it like for a kid from Sebring, who played in the band, served as class president and editor of the school newspaper and worked at McDonald’s, to sit on the state’s high court?

“Great,” she said with a smile.

She brings that smalltown girl with her, along with the lessons she learned from that upbringing and her hometown church, Sebring Church of the Nazarene, attending church camp every summer.

“I need to be kind on the bench, patient, help the lawyers perform the best that they can,” she said.

The Supreme Court operates differently from trial courts, with the lawyers presenting oral arguments and the justices questioning them. She said that’s her opportunity to get clarity about the case and when she’s asking a question, that’s a gift to the lawyer because it reveals what interests her and what she wants to know about and the fact that the lawyer needs to answer that question.

“That’s what you really want, is a dialogue,” she said.

Currently judges and justices run on a partisan ballot in the primary, but without a party identifier in the general election in Ohio. Justice French said there was a bill drafted to put the R or D party designation with judicial candidates in the general election, that there was a concern about not having to rely on the name alone. She said people want more information, to not have the name be the important factor. She noted that some people don’t vote for Supreme Court justices, with a nearly 20 percent drop from those who vote for governor, possibly because they don’t feel they know enough about the candidates.

A resource she recommends for people is www.judicialvotescount.org, where judicial candidates can put all their information in one place. There are other resources, too, to learn about the candidates.

For her, the party designation is more of an identifier.

“I want to tell voters how deeply I care about my work. I am a conservative judge and very proud of that,” she said.

One of the downsides is that judges can’t talk about pending cases or cases that may be coming in front of the court. She did say that death penalty cases are emotionally tough and any cases involving the loss of a child, including custody, can be hard. But those are also the kind of cases that remind her to keep her blinders on, to follow the law and apply the law, without letting emotion get into it. For her the most fun is the time on the bench, questioning the lawyers on cases that can deal with any number of high-level topics, such as the First Amendment.

Her interest in civics education may date back to B.L. Miller Elementary School, when her sixth grade teacher, Jeanne Martinelli, made them take a civics quiz every morning and students had to have at least three pieces of news every day. She recalled watching Walter Cronkite every night. She credits Martinelli with providing her that spark, that interest in the world outside of Sebring, that led her to the bench. She had a lot of great teachers growing up, and her mother was also a teacher, at West Branch.

“I think a lot of teachers and what they’ve helped me do with my life. There was never a time I thought I couldn’t do something,” she said.

After graduating from Sebring McKinley in 1980, she went on to Ohio State University where she earned a bachelor’s degree in political science, a master’s degree in history and her law degree. Her public service included the state attorney general’s office as an assistant attorney general and chief counsel, chief legal counsel to Gov. Bob Taft, then election to the Tenth District Court of Appeals in 2004. Gov. John Kasich appointed her to fill a vacancy on the Supreme Court in December 2012 and she’s remained there since, becoming the 155th Justice of the Ohio Supreme Court on Jan. 1, 2013.

Her tip to students in area schools, small or large, is to have an open mind about what’s out there, to know what they’re good at and not to feel limited in any way. She said “consider every opportunity that comes your way, give it thought.”

Her last piece of advice? Don’t be afraid. She said she regrets any moment she spent being afraid, that it’s just wasted energy. Just keep moving forward.

During her travels across the state, she listens to a lot of audio books and just finished “The Wright Brothers” by David McCullough and a quote by Wilbur Wright really stood out for her regarding what he would say if he were giving advice to a young man.

“Pick out a good father and mother and begin life in Ohio,” the quote said.

French considers herself lucky to have grown up where she did.

She now lives near Columbus with her husband, Ed, a magistrate judge. They have two children, daughter Julia, who works for the Ohio Attorney General’s Office, and son Joe, who’s in graduate school for aerospace engineering.