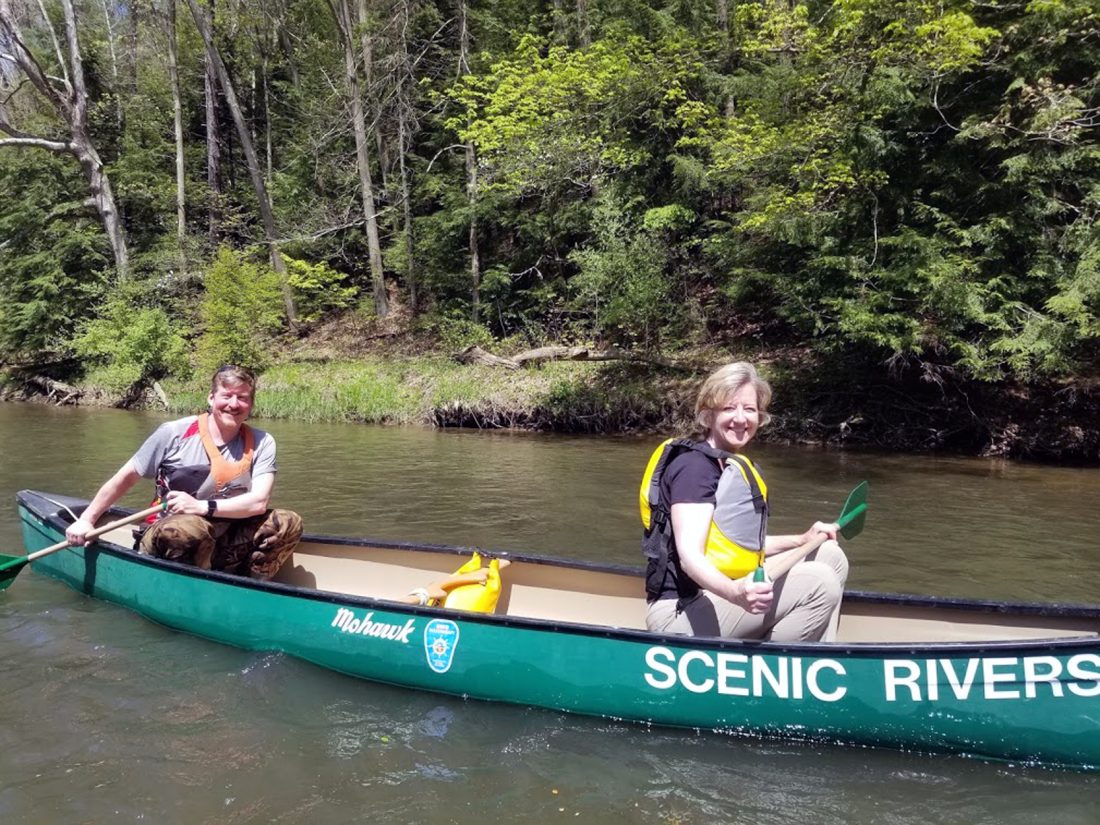 ODNR Director Mary Mertz appears to be having a pleasant journey as she participates in a canoe trip on the Little Beaver Creek this week. She is accompanied by Matt Smith, manager of the ODNR’s Scenic Rivers division.

ODNR Director Mary Mertz appears to be having a pleasant journey as she participates in a canoe trip on the Little Beaver Creek this week. She is accompanied by Matt Smith, manager of the ODNR’s Scenic Rivers division.

MADISON TOWNSHIP — This year’s annual canoe trip on the Little Beaver Creek was used to introduce the new Ohio Department of Natural Resources’ director to its wonders.

Every spring, local officials and ODNR representatives are invited to participate in a canoe trip that traverses a different section of the Little Beaver Creek. This year, Emanuelson chose the Hellbender Bluff Park section of the West Fork and decided to invite the new ODNR director, and she accepted.

“This was a chance to highlight one of Ohio’s wild and scenic rivers (Beaver Creek holds both a national and state designation),” he said, noting the stream is known for its water quality, diverse wildlife, beauty and popularity among outdoorsmen and women. “We just wanted to show it off to a new director.”

Emanuelson said it is important to build and maintain relationships with the ODNR, especially the new director, as part of their continuing mission to preserve and protect the Little Beaver Creek.

“We’re always trying to protect as much of it as we can,” he said. This can be done by protecting property along the creek from potential development by obtaining the property through scenic easement whenever possible, or continuing to promote good forestry and farming practices that prevents erosion into streams that drain into the creek.

Emanuelson said the previous administration did not provide any state funding for scenic easements but they are hoping the ODNR under Mertz and Gov. Mike DeWine will be more receptive. He noted ODNR’s Wild and Scenic Rivers division has already been moved back to the Natural Areas and Preserves division. Under the Kasich administration, it had been merged with the Watercraft division, which has less staff and funding.

Mertz, an attorney, served as first assistant attorney general when DeWine was state attorney general. In a story posted on cleveland.com, Mertz described coming from a family where her father and brothers were avid hunters. She learned to sail and fish from her father while growing up near Dayton and frequently cruises Lake Erie with her husband in their sailboat.

Emanuelson described Mertz as very impressed by the creek and Hellbender Bluff Park, which is part of the Columbiana County Park District, and she even spotted a bald eagle. After the canoe trip he received an email from another ODNR official, who described the Little Beaver Creek as one of the most beautiful streams in Ohio.

Another goal was to familiarize the new director with what the watershed coordinator does, which includes assisting the state on its efforts to restore the endangered Eastern hellbender to its original habitat. Once common in streams from New York to Arkansas, the giant salamander has largely disappeared from most of its range due to pollution and silt build up from sediment run off. The numbers of hellbenders are on the rise again due to state efforts to reintroduce them and because Ohio streams such as the Little Beaver Creek are much cleaner due to silt prevention efforts.

A powerful #MeToo chapter in ‘On the Record’ doc

Football lessons learned from the 1918 pandemic