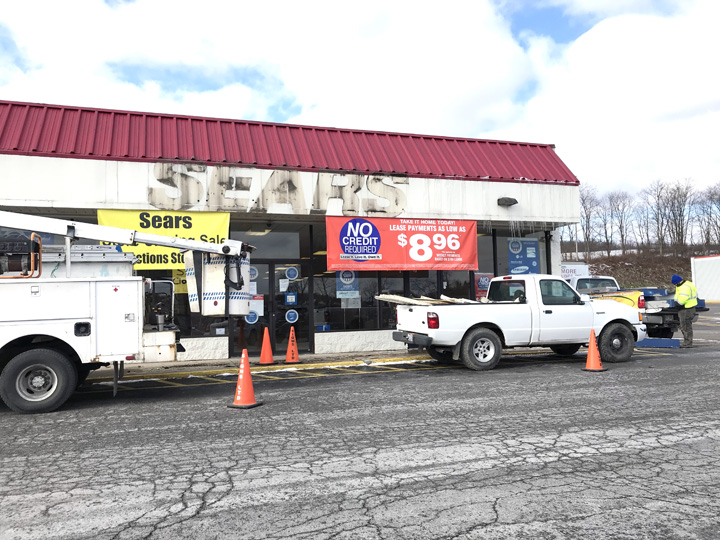 Morning Journal/Jo Ann Bobby-Gilbert People were removing fixtures from the Calcutta Hometown Sears store Friday as it prepares to close its doors. The Ace Hardware will expand into the building. There are no current plans to reopen the Sears store, according to an official.

CALCUTTA — After serving the area for nearly 20 years, the Sears store on state Route 170 will close its doors today.

According to district manager Jerry Foringer, the privately-owned store has been in liquidation for the past six weeks, and unlike many Sears stores that are closing nationwide due to faltering sales and bankruptcy, this closure is due to an inability to negotiate a new long-term lease with the building owner.

The local store is not involved with Sears Holdings which has closed several hundred stores nationwide but is a Sears Hometown Store, according to Foringer, who said it had been owned by a local man but was being company-run and in the process of finding a new owner.

Asked if the store might reopen at another location, Foringer said, “It’s always a possibility, but based on what’s going on with Sears Holdings, we’re not looking at reopening another store. We’re hesitant to move on with some other project until we see what’s going on with them.”

Meanwhile, just a small amount of merchandise remained for sale on Friday, and sales have been “good” as the store winds down its business here in Calcutta, Foringer said.

“A lot of customers are saying, ‘We’ll miss you.’ It’s never a good situation,” he lamented.

Hometown Sears still has about 500 to 600 stores in business, he said.

The store employed about five people who are now without jobs, according to Foringer. Some were still working Friday as shelving and other fixtures were removed from the building by buyers.

Ace Hardware, located in the adjacent storefront, will expand into the former Sears store, according to Foringer.

The Kmart store located just next door also closed its doors for the final time this past Sunday.